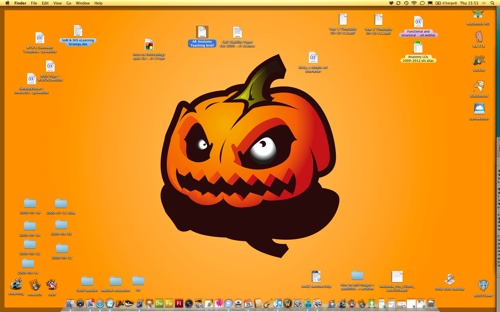 I’ve always loved Halloween, maybe from an interest in all things ghoulish (and I guess that interest may have lead me to my current job).
Go and get your Halloween wallpaper:
– Lifehacker: Wallpaper Roundup: All Hallow’s Eve and Spooky Scenes

Kim & I are on our way to Dublin. The kids are staying with my parents, so it’s going to be a weird weekend.
This taper period has been very interesting. My legs have become very strong & swift, with some tightness of most of the tendons passing around my ankles. My heart rate was strangely high on this morning’s easy run, although my pace, RPE & breathing indicated I was running easily. My aerobic threshold seems to have jumped about 15bpm with this recovery period, but may be transient (or stress or caffeine induced, although I’m not aware of any strong stress, especially when running, but it may well be there). My weight has naturally & easily dropped to my target weight of 63kg with no effort. My appetite just adjusted to the changes in training volume & my body seems to have adjusted its need to store fat.
The trick in Dublin is going to be in staying off my feet. In a city there’s a desire to wander & explore (particularly with Kim’s architectural interests) but I’ll try to counter that by lazing in cafes & restaurants as much as possible.

With 5 days to the marathon I’m well into my taper, and it’s a funny thing. It’s almost like I’m already into the rest & recovery part of the season. I’ve never tapered this long before (and for much of the time when I was racing, years ago, I never really tapered) and I’m out of routine and feeling lazy. I’m certainly not in race mode.
The legs are feeling strong, and when I do run, easy pace is fast. The taper is working and it’s likely I’ll be in my best form of the season on Monday (fingers crossed, touch wood and all other superstitions that apply). I’ve got a tempo run today that I’ll run at race pace and that’ll probably wake me up again and get my legs feeling “normal”.
We’ll be flying out to Dublin on Saturday. The weather might improve for race morning!

I’m writing the quiz for my introduction to embryology lecture that I’ll be giving to the first years next week. The quizzes use the Turning Technologies interactive ‘clickers’ systems, and we use them anonymously. There’s no record of how well an individual scores within the lecture quiz – it’s just for fun (and instant lecturer feedback and concept checking, of course).
Last year we had a competition for boys vs girls over the whole series that went very well (albeit with a little cheating). This time around the embryology lectures will be spread wide across years 1 and 2, and there will be fewer of them. I don’t think I can use the competition format again. I’m sure if I asked the students not to cheat they would listen and refrain, but I think that the competitive element will be lost by spreading the lectures out over so much time.
Maybe I could pick the highest scorers for each lecture (but that misses the anonymous answering aim), or have teams per lecture without tracking through the year (but the competition got stronger as the year progressed and the scores built for each team). I’m a bit stuck. I’ll have a think about it.

How do you access most of your information? As a learner? As a teacher? (Unfortunately this is a question you’ll have to think about, as I still haven’t fixed my comment system). 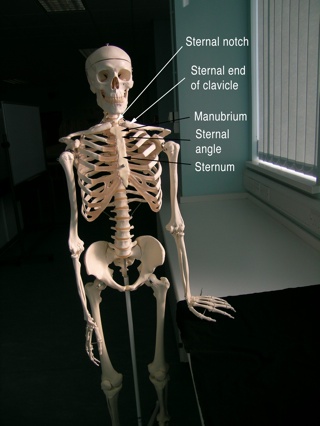 When we looked at the surface anatomy of the thorax yesterday we focused on the bony bits anterior to the mediastinum. We found the sternal notch (or suprasternal notch, or jugular notch), the sternal ends of the clavicles, the manubrium, the sternal angle (or angle of Louis) and the sternum. Our aim was to look deep to these landmarks for major thoracic structures like large blood vessels and parts of organs and compile a table as we progressed.
So, what did we find?
Deep to the sternal notch almost all of the blood vessels have bifurcated to the left or right to avoid this weak spot. If we palpated the sternal notch we could press on the trachea, posterior to which on models we found the oesophagus and then the vertebral bodies themselves. We also found the inferior thyroid vein here, which is why you don’t use this region for an emergency tracheotomy, I guess.
Lateral to the sternal notch, the medial ends of the clavicles were found to overlie the brachiocephalic veins. In this region we saw the brachiocephalic vein on either side form as the large internal jugular vein from the neck joined with the subclavian vein. Deep to this we saw on the right side that the brachiocephalic trunk was deep to the right brachiocephalic vein here, but on the left side the left common carotid artery and left subclavian artery were independent of each other, having separately branched from the arch of the aorta (well, in all models except one!) On the right side we found that a little superior to the sternal ends of the clavicle the brachiocephalic trunk split to give the right common carotid artery and right subclavian artery. All of the large vessels in this region were well protected by the superficial muscles of the neck and the bones of the clavicle and manubrium. Rarely, the vagus nerves and phrenic nerves were discovered descending through this region on either side (the vagus nerves were passing with the carotid arteries, and the phrenic nerves were upon the anterior scalene muscles (look at the images in those links) – you might need to hunt again for these).

Moving inferiorly, on some models we saw how the superior vena cava formed from left and right brachiocephalic veins deep to where the 1st rib joined with the manubrium. Posterior to the manubrium was the arch of the aorta.
At the sternal angle (where the manubrium meets the sternum, very palpable) we could form a plane across to the intervertebral disk between vertebrae T4 and T5 (the transverse thoracic plane). Superior to this plane was the superior mediastium, and inferior to this plane was the inferior mediastinum (which was further split into anterior, middle and posterior mediastinum by the heart and pericardium). The plane cut through the start of the aortic arch and its end, where it becomes the thoracic aorta. We also found the carina, where the trachea bifurcates into the main bronchi, and found that this is a great place to start counting ribs from (rib 2 is here).
The right side of the heart was found deep to the sternum, and we noted that if you drew a line from the middle of the left clavicle down the thorax, perpendicular to the floor, the apex of the heart’s left ventricle extended this far. This line is a midclavicular line.
Here’s one of the tables that we compiled: 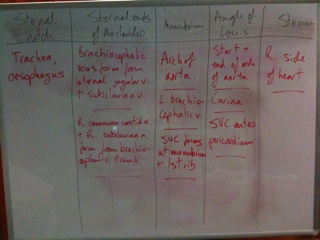 2 weeks to go until the Dublin marathon. At this late stage I’ve got a big pile of fears. I’ve worked hard for a year, I’ve put in huge efforts in training and I’m not planning to run marathons every year, so I’m putting all the preparation on one big race: the 2009 Adidas Dublin Marathon. (That’s not actually true of course – I’ve had great races all year, I’ve beaten my targets and expectations, and I’ve got really strong legs and a solid foundation to take into next year, but that’s how it feels right now).
Fears:
1. I’ll get ill before the race. I’ve had Jack’s virus for a few days and it killed my legs, for example.
2. The weather will be horrendous, making the race impossible to enjoy and killing my hopes for an awesome time.
3. I’ll get stuck in a bottleneck.
4. Tendons will tear.
5. Bonk (sorry, “the wall”).
6. I’ve woefully misjudged my pace planning.
7. Er, that’s about it.
That doesn’t seem so bad when I write it out. My number one worry is illness, and I think I’m pretty well prepared for all the other things (and for most worries of other runners that I’ve previously considered and discarded).
Fear, fear, fear. This all seems pretty negative, but positives arise from negatives. Without a challenge of significant difficulty and uncertainty it’s impossible to feel real achievement with completion and success.
Like I said, 2 weeks today!

Jezebel have an interesting article on the importance of easy communication, in this case via the mobile phone, in developing countries. (I don’t read Jezebel, honest – this was linked to from Gizmodo). There’s an important need to be able to easily contact someone, but also to access information.
I’d love to know more about how students, lecturers and clinicians use mobile phones in our links (e.g. Gambia, Nigeria: swanih.org).
How Mobile Phones Contribute To Female Progress In Developing Nations (Jezebel, via Gizmodo).

There are a bunch of new first years on the course getting into (and a few very much already into) triathlon. If you new guys & girls are looking for advice there’s nowhere better than to start than with words from the Don.

Have a look at some of the other Oakley Armchair Sessions on Youtube too.

Training has been made much easier over the last month by the great September weather. After another dodgy summer Kim’s predictions of good weather when the kids returned to school proved correct, and we’ve had almost no rain for 4 weeks. It’s far easier to drag yourself out of the door to run when it’s dry & bright outside and it has been very pleasant. Living by the sea means that you’re doubly rewarded by sunny days.
Today the weather has changed. We have strong westerly winds & rain for my final 20 mile run of the year. I’m not going to whinge. I love autumn & I haven’t got much more training to do, but the first 10 miles out into that headwind on a flat, exposed coastal route is going to be tough.
If I complete the run I’ll have completed my biggest running week ever. By a country mile (by that I mean a long way, not just a single mile BTW).