Unusually I’ve not blogged in 11 days. Actually, that’s not entirely true – I’ve been photo blogging (moblogging?) to Flickr. I’ve had a bit of a break at the end of the summer & we’ve been taking the kids on lots of daytrips, sending photos to Flickr & comments to Twitter as we go. I never believed in convergence until I got an iPhone. It’s rather good.

I finished my 2nd training block of 4 in my marathon preparation. My legs felt awesome today – light & quick. I’m at the end of an easy recovery week and every day my run has got quicker & quicker. This block included my first 100km week of running (ever!), and that’ll be the standard for future weeks. My tendons are getting better so I’ll be putting the speedwork back in too, and probably be pushing it as hard as I can for the next 3 weeks. I still need to watch it & have got a fair bit of therapy planned with the man that looks after my legs.

After block 3 I have 1 tough (really, really tough 120km with nasties) week and then a 3 week taper to the marathon. If I get it right I should be feeling freaking awesome by the time I get to Dublin. You’ve no idea how good I feel running this week. 20 milers are no longer scary & I’m keen to stretch myself.

So I think I’m more than halfway there. I’ve got some challenging numbers spinning around inside my head.

The brain’s sulci seem to play a role in physical damage limitation. A study modelled the effects of impact on normal brains and gyri and sulci free brains. The smooth brains were more vulnerable.
Links:
Wired article
Ho J, Kleiven S. (2009). Can sulci protect the brain from traumatic injury?,
J Biomech. Aug 11, epub ahead of print.

I just got back from a fairly tough run. Tough because it was a two hour run at the end of a long week of running, because I’m getting fatigued, because my lower legs feel like they’re made of wood, & because it was raining & I had a brutal headwind on the way out when the path opened out by the sea.
The first couple of miles were a hobble but a running gait started to develop as wooden muscles warmed & softened. The rain wasn’t too bad but the wind slowed me down, so I was behind schedule at the turnaround. I was going to be late getting home to look after the kids (Kim teaches karate) so I increased my pace, & not just with wind assistance.
As the running got harder I thought of the upcoming marathon, the time I want, the distance, the pace required & so on. I found my desire, my visualisation of running around Trinity College with a particular time on my watch, getting stronger. It wasn’t a wish, or a calculated task, but a full-blown, strong, animal emotion. Hunger, need, ambition, lust, yearning, desire.
Excellent. It’s still there. Without it I’d fail.

I’ve been aware of this for some time, but the New York Times have summarised some of the data suggesting that running is good for your knees. Most people seem to think that the impact of running is bad for your joints, but as long as you look after yourself and your joints you’re less likely to develop joint problems if you run.
Article:
New York Times: Phys Ed: Can Running Actually Help Your Knees? 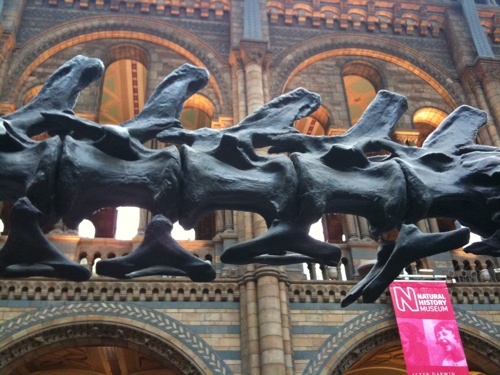 Now that’s a vertebrate! I’d love to spend more time looking at dinosaur bones and the similarities between vertebrates on separate evolutionary destinations. Does anyone fancy another museum trip? About to head out of the door for my first 20 mile run.

Wow, Twitter has been down for hours now. Do we go back to “traditional” blogging?
– Water is pouring through the ceiling of reception in the School of Medicine. Neither my power or wifi were affected though.
– Remote control of my iPhone on the bike is ace, just like in the old days of the early iPods.
– Voice control of iPhone on bike also awesome. “Play songs by Bon Iver”. It freaking works!
– Kids are mental. Early night for them both. Can’t even blame the heat!

Most of the sports injuries I’ve had over the last year have been troubling but fairly easily and quickly remedied. Some have been long term problems that I was already aware of and have worked for months in the gym to try to fix, with much success. Very recently I’ve picked up my first connective tissue problem though, and that’s much more worrying. For runners the Achilles (or calcaneal) tendon probably has a bit of a stigma attached to it. It’s a top target for injury and can lead to serious problems.
I’ve had some tightness of my plantar fascia (or aponeurosis) in both feet for weeks, and have been stretching them accordingly. It may be a result of my long bout of power and plyometric work, cutting back on my stretching routines and massage, a change in running style to push my centre of gravity forward, or just long term fatigue and degradation. The plantar fascia links the calcaneus (heel bone) and the anterior parts of the foot, such as the metatarsal bones. It acts to maintain the arch of the foot and is important in walking and running. If it shortens it will pull on the calcaneus.
The calcaneal tendon is also attached to the calcaneus, and is the insertion point for the muscles of the calf (gastrocnemius, soleus). My sports therapist and I are in the process of working out what’s going on in this part of my leg, but the calf muscles don’t seem particularly tight. I’m inclined to think that the tight plantar fascia is a cause of the calcaneal tendon pain, but there are other issues here such as a long-term problem with my tibialis posterior muscles. I haven’t increased my milage recently, I’ve been running 50-mile weeks for a few months now, but I’ve increased the length of my long runs.
Like most people with this sort of pain I have the typical early symptoms: pain midway between the heel bone and the muscle that disappears after running for 10 minutes or so, stiffness in the foot/heel/ankle first thing in the morning, and tenderness of the tendon when gently pinched between thumb and forefinger. The tenderness disappears sometime after running. The problem has been noticed early and doesn’t stop me running.
I’d intended to write about the decisions that must be made, but the anatomy lesson took over a bit. So, what should I do? It’s very easy to think that I can still run, that it doesn’t really hurt much, that it’s not affecting my gait, and that it’ll get better on it’s own. I don’t want to lose the planned mileage and speed work because then I might not meet my marathon goals.
But. Worst case scenario: I continue with my program, which is a tough program, the problem gets worse, becomes persistent, the tendon weakens, and I get to the point where I can’t start the marathon or the tendon becomes so weak that it snaps. I’m a connective tissue biologist. I know how poor connective tissues are at repairing themselves. Long term problems follow, with years of tendon problems ahead.
Ok, what’s the opposite end of that? I quit running and any training that stresses that tendon for 2 to 3 weeks, apply therapy religiously and reassess. It’s August now and the marathon isn’t until the end of October so I’d have plenty of time to get some fitness back if that strategy works, but I’m unsure of what I’d be able to achieve. The tendon would be strong again and probably as good as new, and I’d be able to train as hard as I like next year.
In the middle: I continue with my program, cut all speed work and hills, pay attention to this part of my body particularly after long runs, stretch everything (plantar fascia, gastrocnemius, soleus, tibialis posterior) 3 or more times a day after warming them up, before and after workouts, RICE after a run, get sports massages, and take extra days off running and replace with cycling. Reassess after 2 weeks to decide whether the problem is getting better, worse, or stays the same.
I’ve got 2 races in September but would happily jog those and enjoy the views. Luckily in my mind the marathon distance requires more distance preparation than speed preparation (although ideally I’d do both) so I think option 3 is the option I’ll take. If the problem doesn’t start getting better then I’ll look at option 2. My main aim now is to get the long runs done but turn up to the race with strong tendons. The 3 week taper should help with that and I’ll have 4 weeks of rest after the marathon to recover.
The main reason I’m running so much this year was to strengthen my legs and hips to avoid injuries in future triathlon years. My marathon goals have somewhat taken over now (although my legs, hips and core are indeed a great deal stronger now than last year).
Decisions, decisions. It’s not easy. On my day off, building a model skeleton with Jack.

This smaller one worked though. The hole in the to