Read the first edition of Action Comics, and the first Superman story scanned for you online: here.

How hard is it to cancel a service via modern company phone systems? I recently signed up for a contract with TalkTalk after discussion with a sales rep as to how it would cut my phone bill. After studying my phone bills in more detail and finding a Â£3.95 monthly charge that would appear after 3 months of use (no-one mentioned that) I decided to cancel. I rang TalkTalk several times during the 10 day cancellation period, each time choosing the options that would take me to the appropriate cancellation department. Each time I failed to get through to a real person because: 1) “sorry all our operators are busy right now, call again later” disconnected… 2) I was just randomly disconnected with or without being on hold, 3) “sorry but that international number is not recognised” disconnected (after connecting to the TalkTalk phone system). When I did actually get through to a real, live human being it was because I had not chosen the cancellation options, but picked sales. That’s rather dodgy, isn’t it? Of course that real live human person then had to transfer my call to the “cancellation department”. The first time I actually got through to them (the third person I spoke to) there was no record of my contract yet, so they couldn’t cancel it. The second time I was transferred to the Carphone Warehouse, and after holding for 8 minutes was told that they (of course) could not cancel a TalkTalk contract. I was given a direct number to the cancellation department. Could I get through? Not a hope. Days went by repeating these processes, and the 10-day window cam and went. I gave up trying, as I’m sure was the intention.
So now I am a TalkTalk customer. Oh, how happy am I?
I just rang Orange to cancel my contract. Well, actually I don’t want to leave Orange entirely, just drop the contract and swap to pay-as-you-go because I use my phone much less now that I’m not commuting. So I carefully followed their phone system’s options to take me to the cancellation department. Can you guess what happened? “At Orange we value your call and the quality of our customer service, and your call may be monitored and recorded for training purposes”… disconnected. Aaaaargh!

I really didn’t want to come in to work today. We’d had an excellent extended weekend and I was woken by Jack at about 7.15 this morning. I was nice and comfortable at home and Jack was really sad about the idea of me going to work for the day (I’ll aim not to work too late this afternoon). By the time I had packed everything I needed for the day I really couldn’t muster the energy to get on my bike. It was chilly too, with the suggestion in the air that September starts this week.
Nonetheless, I got on my bike and onto the cyclepath (after an unusual struggle to turn right on the road with car drivers uncertain of their ability to drive properly). The sun was out, the woods were bright and green, and I soon warmed up pedaling easily uphill. As usual, by the time I reached the sea I was feeling much better – awake and brighter. The tide was almost in, and the sea was flat calm. The sky was still blue, so it was very pleasant. I found myself looking forward to getting to my desk and preparing the next few weeks of teaching with a cup of tea.
So far all is going well. I think I must be lucky to enjoy my job, right?

This is pretty nuts, and seems to be corroborated by Canadian press. A young man on a flight accidentally dropped his iPod in the toilet, which was noticed later. This caused the flight to take an emergency landing, all the passengers to be interrogated by customs, the police and the bomb squad, and the plane searched for explosive devices. Oh dear.
The guy was flying to meet a World of Warcraft buddy, so the whole story is on their forum. Read it here.

I’ve been taking a nice long weekend. It’s a bank holiday weekend that crept up on me, so I took advantage of it and extended it. My dad has been able to visit, and as I’ve been to the driving range quite a lot recently he took me out on a couple of rounds of golf on the local small par 3, which greatly improved my beginner’s game, and then destroyed it by giving me too much advice on the driving range. It’s all good advice but my tiny little mind can’t cope with it all and my swing suffered. I’ll work on one piece at a time and it’ll all come good.
Next week our next batch of students start, so I’ve been keen to relax as best I can before it all kicks off again. The autumn term up until Christmas is very busy. It has been excellent to spend some time with Dad, & Jack has certainly enjoyed it too. My brother and his girlfriend popped down yesterday (2 hour drive each way – it’s a good job he’s a professional driver) so we all went to the beach to build sandcastles, play football and hunt around in rockpools. I think most of the family really enjoy the area in which we live and it’ll be very nice to be able to play on some of the local golf courses (there are many) with my dad and my brother.
OK, so now I’m training for triathlon and playing golf. It should be interesting to see how that all gets fitted in, but it should balance my head nicely through the autumn. 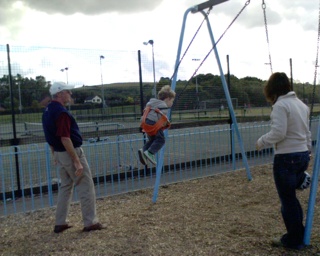 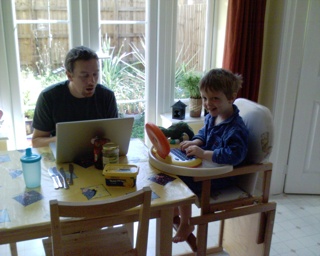 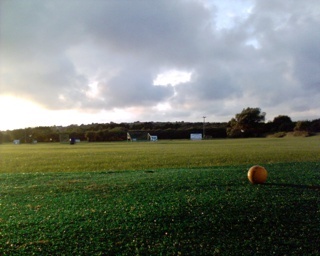 I had an interesting idea a few weeks ago. I don’t listen to my iPod when I’m running or cycling, but I know that many people do. Kim won’t go without hers. I also know that interval training in both running and cycling are very important in developing speed and muscle energy systems. Running intervals once or twice a week also makes the run itself more interesting, and can be fun if your fitness is developing well. I have a watch that beeps at me to tell me when intervals start and stop, and the heart monitor lets me know if that I am exercising at the right level for that interval and for the subsequent recovery. For those that use MP3 players you should be able to do a similar thing with music. I’m sure someone must have implemented this already, but I’ll explain myself anyway.
Someone could record a podcast, using favoured music of an appropriate tempo, and change tracks depending upon the speed or effort required for a particular section of the run. Fast music for fast intervals, slow music for the recoveries, the warm up and warm down. You could even add a vocal track, counting down to the end of the hard, fast section, encouraging you, or informing you how many intervals remained. I suppose famous sporting heroes could be asked to provide the vocal motivation, or to provide a podcast version of their favourite (or most hated) training sessions. This could be a free or cheap service for those that don’t want to train with a heart monitor. You could even provide a series building up to the athlete’s chosen event, say a 10km race or a marathon.
Just a thought. 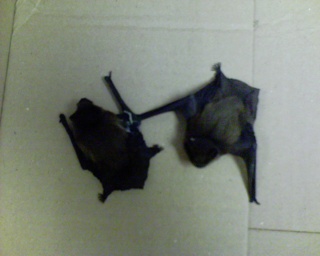 I’m back in work again this week, as we have a week of resit exams for the first years. The first exam that I was involved in today had bats flying round the room half-way through. I hope this isn’t a sign of things to come this week. We may have a plague of locusts by Friday.
We very carefully captured the bats. One was very tired, the other very maternal (mother, youth pair?) After reviewing the excellent information on the Bat Conservation Trust’s website I decided to keep them safe during today in a cardboard box, and to come back this evening at dusk to release them. I hope this works. The “tired” bat seemed to have recouped some of its energy by the time I took this snap.