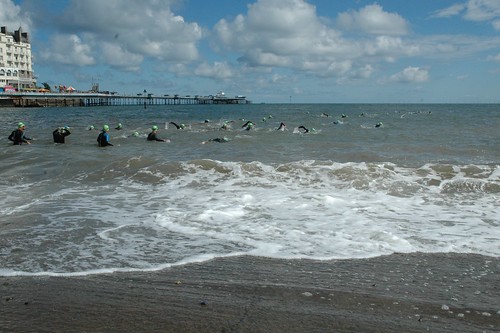 As I turned 40 this year one of my aims was to race in all of the Welsh Triathlon Championship events this year and have a crack at some medals. I’ve failed, missing the duathlon champs with a small gastrocnemius tear, and I’ll miss the sprint triathlon champs because I’ve elected to race in XTERRA England instead and give myself a new challenge. I did make it to the Welsh Standard Distance Triathlon Championships at Llandudno a week after the Euros and then to the Welsh Aquathlon Championships the following week in Poppit Sands. Those races were rather good.
It’s been a busy few weeks, which, with some prolonged work stress in combination with the training and racing stress (physical stuff, don’t be a salmon, etc) has left me a bit knackered. The Ffit Conwy Llandudno Sea Triathlon has a cracking course. I was much better off swimming in a sea with a bit of swell than in a calm alpine lake, and the 2 lap course helped with pacing and tactics. I was having a chat with the starter in a kayak when she sounded the horn and started the race, so it was a low stress start too. Parp and we got going, failing to even start my watch and getting into a pairing chasing the leader around the buoys. 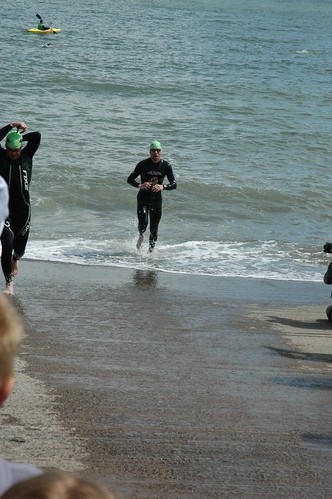 The swim is good for spectators too because it’s close to shore. My wave was 40+ year old men so I could race directly against those in my championships age group. Out off the water in second or third I had a good run to transition and passed one guy at the mount line and the other on the first part of the starting hill out around Great Orme. A bike course with hills and a sea view on your right almost all the way around. How many races have that? 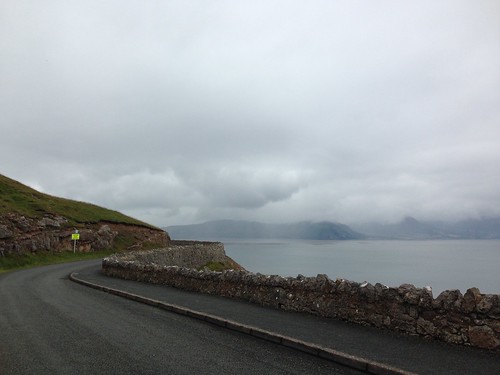 My bike pacing was a bit better than the previous week, and the hills got harder and harder but I was busy overtaking and making time on the chasers and on those ghosting in the other waves for the overall positioning. The road surface is really rough and gradually caused a wee mechanical issue with my left shifter but no failure. I’d recon’d the route the night before so moved my bottle cage off the tri bars and onto the down tube to prevent losing the bottle through this bouncy stuff. Good painful climbing, lots of aero time and fast descending, never quite taking the same line twice because of the need to overtake slower athletes. 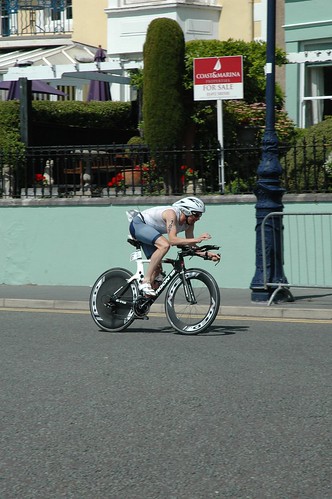 I was a bit knackered off the bike and the run around the bay is long. Long, long, long, and longer on the way back in your brain. I’d also checked out the hill on the run and with tired quadriceps muscles from the hilly bike and a failure to understand how to get water out of the fancy water pouches and onto my head or into my mouth the hill was long, hot and hard. After the turnaround it looked like I had plenty of time on those in my wave but having no idea how fast anyone in the other waves had gone I had to muscle it up the 10% climb back and then pound it down the other side, counting down the km’s. 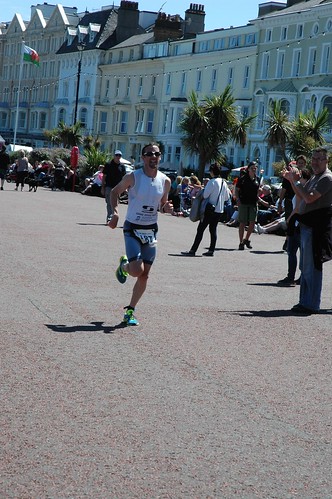 From the hill you can see all the way to the finish line and it hurts so badly you want to slow down, stop or sob. It’s so far away and so small, and you have to go fast and hard and keep pushing don’t ease up and you can get top 3 if you push push push push push push.
I started fading even as the pain was rising. Push push push to the line. And collapse. In the shade. Pain gone.
I finished 2nd overall with the 3rd athlete only 14 seconds slower than me, and I was the first athlete registered with Welsh Triathlon. That won me the V40 Welsh Triathlon gold medal, but unfortunately the W associated with my name didn’t get passed to the Welsh Triathlon people at the event, so I missed out and the medals got mucked up in my age group. I pointed this out, and it looks like Welsh Triathlon will give me a medal and title as the overall Welsh Triathlon National Champion, rather than just for my age group. So that’s a bit special. Annoying at the time, so it will be nice to see the medal itself. Chris Silver from Cardiff Triathletes too finished in 4th and won gold in the Senior Male category. Very good! 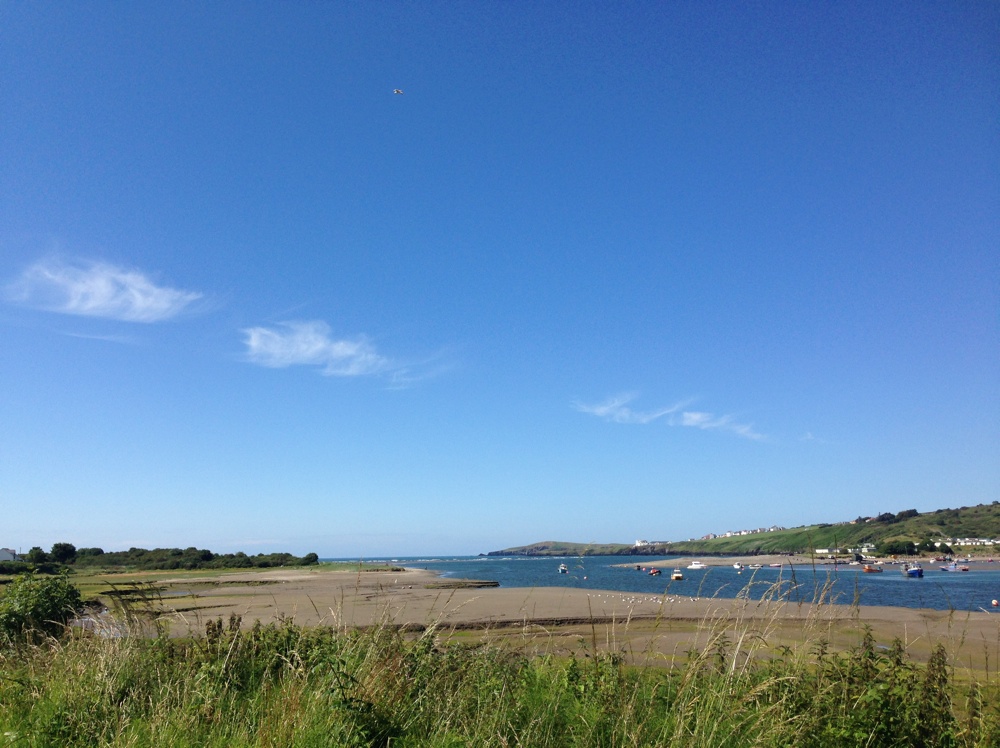 The next week we went up to Poppit Sands for the aquathlon. What a gorgeous place, and what a great place for a race! The weather forecast was poor but turned around to give us an amazing blue sky sunny day on the sand and we camped for the weekend, which the kids loved.
This was always going to be a short race, with a 1000m swim and a 5km run. The swim is a bit too long for me as a weaker swimmer and the run a little too short to run everyone down in. The run is technical though, with off road sections and a lot of different types of sand, so it’s a long 5km.
The swim starts with a running beach start, and it’s very shallow so if you can keep your knees up you can run a long way towards the first buoy, and then dolphin a long way after that. Once we got swimming I found I couldn’t really pull hard, and didn’t stay in contact with the front group. I stayed relaxed and balanced, enjoyed the clear water and the pretty jellyfish with streaming blue tentacles beneath me, and kept pulling and reaching. Arms started to get heavy towards the last buoy and a junior caught me. I swam with her until we were able to run and was glad to be able to run out and charge up the beach to transition. 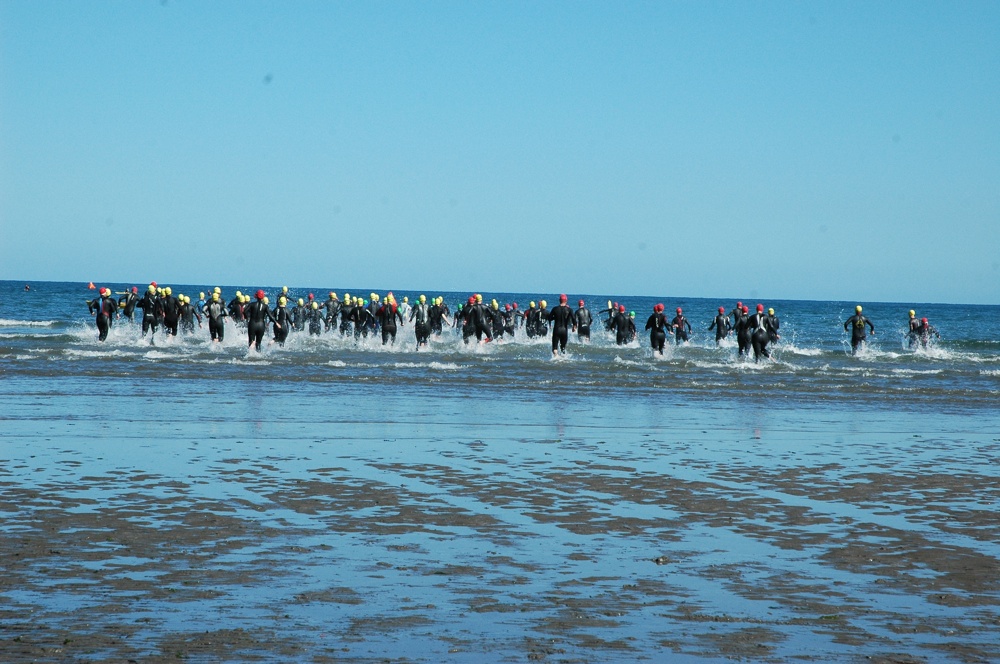 Shoes on I couldn’t see anyone ahead apart from a relay runner. I caught her in the sand dunes and called to her as she went the wrong way, picked up another junior in the narrow uphill section, and then took a couple of runners on the tarmac past the farm. I chased a guy on the downhill section and sprinted past before the narrowing of the next off road section (it pays to recce these technical routes beforehand). I’d checked out the quickest routes through the next section so got ahead, crossed a stream at some stepping stones and was on and past another runner before we hit the main beach section.
On the huge sand spur at low tide you can’t see the marshall that you run around at the far point when you enter the beach. Moving down to the firmer sand of the tide line I had to work hard to catch the guy in second position. I could see the leader. Almost at the turnaround point I got close to the guy I was chasing and put on a relaxed air so that when he turned and saw me it looked like I was breezing along. The marshall was slowly shuffling his way back towards the finish as the tide was coming in, so the later runners will have run an ever so slightly shorter course. They really use the whole beach here. 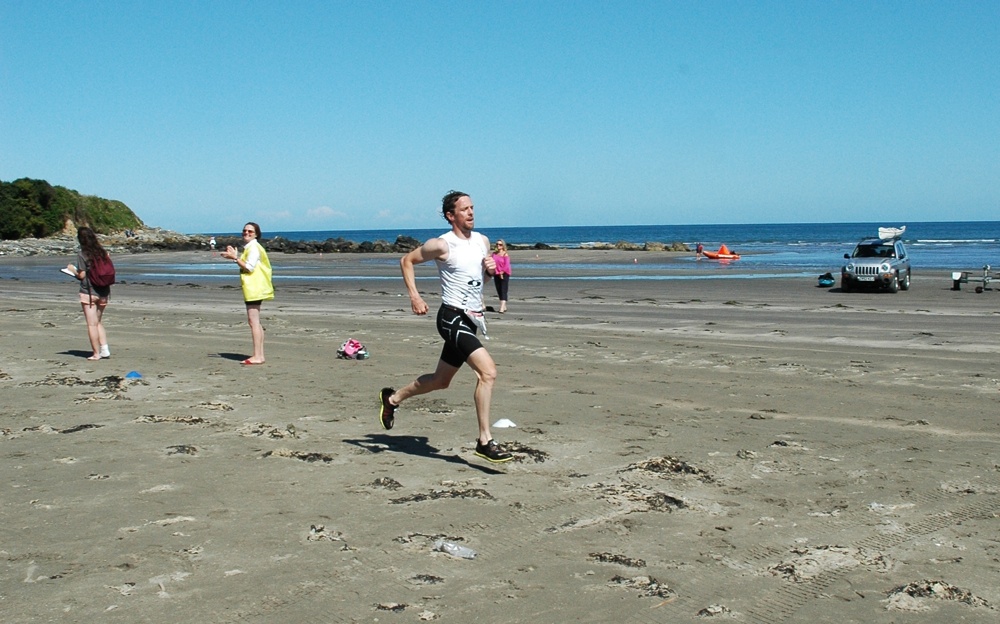 I caught second place, sat out of the wind for a moment, pushed past and sighted a line to the finishing bend. I was so focused on this line that I missed a tongue of sea projecting into the beach and had to turn left to find shallow water to run through and back onto the beach. At the curve to the finish I was comfortably ahead of 3rd and 1st had finished so I was able to jog it in. It was a very, very hard run until that point. Great!
So another 2nd place overall, behind a junior I think, and a 2nd gold medal in 2 weeks as the 1st V40 in the Welsh Aquathlon Championships. Pretty good, and little wonder I’ve been so tired since. My swimming still isn’t fast enough. After 6 months or so of preparation and racing I’m a little worn out but my body should be back to normal training soon. My mind is ready for it. 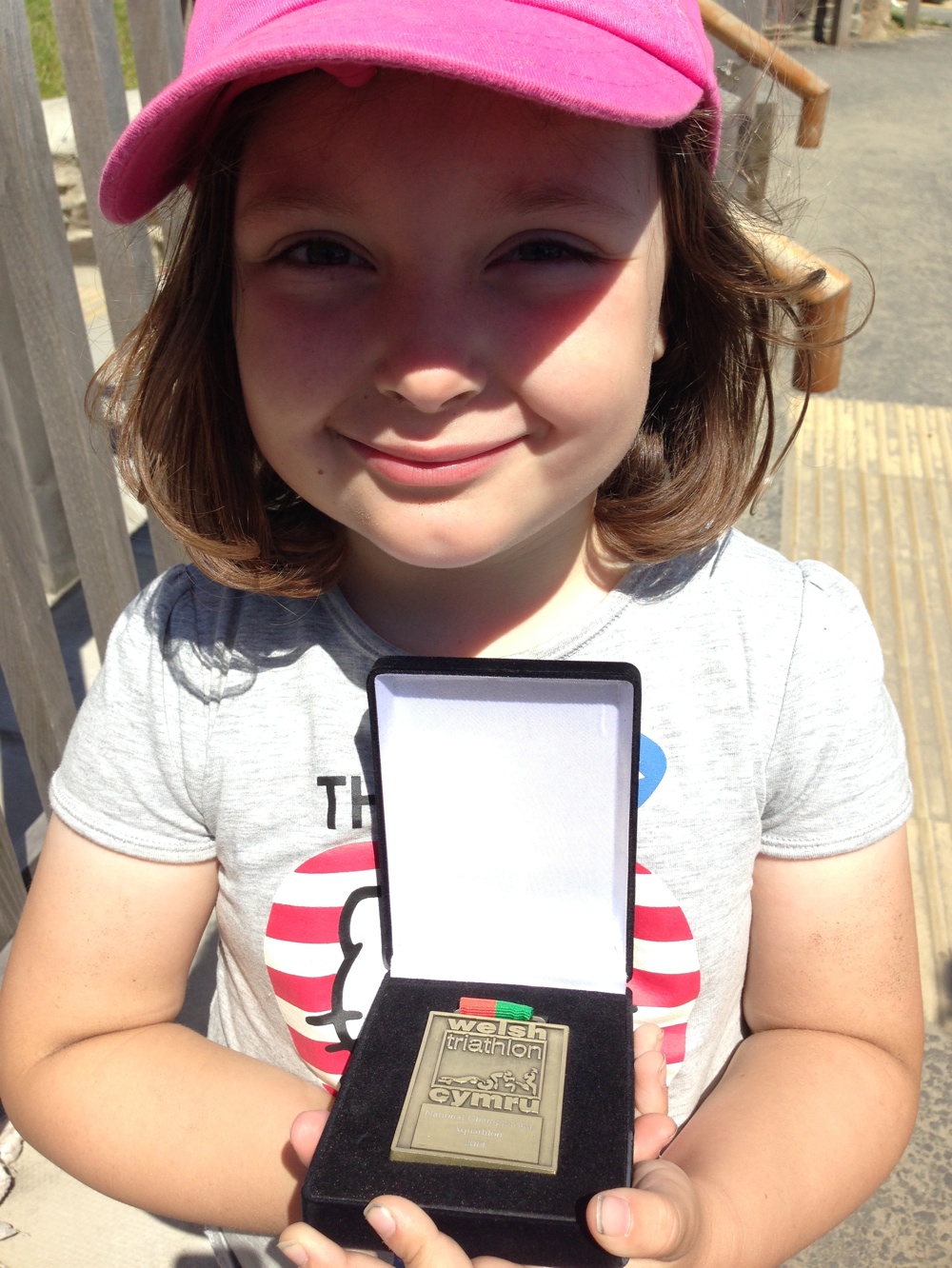