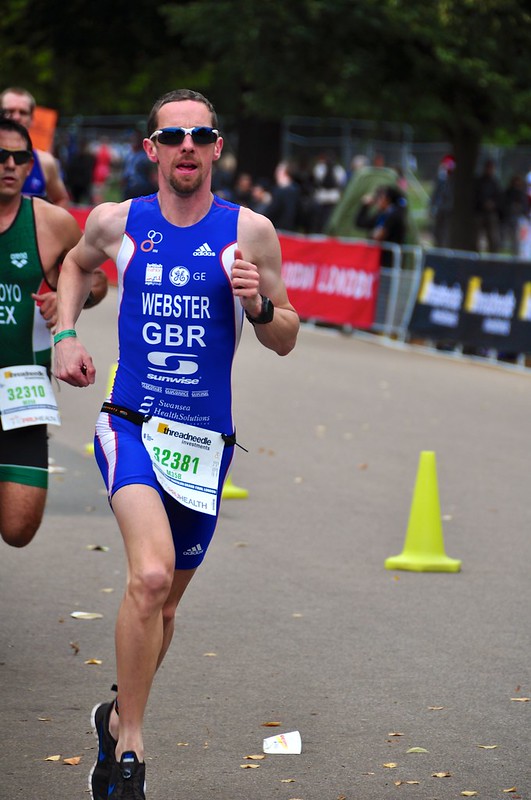 Did it! Finally, the age group World Triathlon Championships arrived and we got it done. Much of my fear and worry was based in just starting and completing this race. I’ve had bike problems, the roads were wet over the weekend and there had been crashes on the roads and slips and falls in transition, and there’s always the worry that you’ve forgotten something that will knock you foul of the ITU rules or that something will break or go wrong before you even start. It has a been a tough year of competition just to get to London. But all was good.

On race morning the air temperature was lower than expected and the organisers shortened the swim to 750m for all waves in the standard distance race. It was a bit of a shame, and the Serpentine itself wasn’t that cold but it wasn’t a problem from my perspective. My age group was one of the last to start the race, so I had a 5:30am start to go and set up transition and then went back to bed for a lie down rather than a snooze, to chill out before going back to the start/finish area at about 9ish.

I was good and clear in my head about what I was trying to do, and saw some club mates very briefly before getting penned into the starting area. We had a long, long wait hanging around in the pens before the start and it was very difficult to stay warm. Any effects of a warm up disappeared, even with lots of arm swings.

The usual fast start was pretty good with a wide pontoon start and the first buoy 250m away. The water was cold, and so was I, and I felt a bit rubbish. My stroke wasn’t great and I left a gap, losing the front group. For the first turn and first few buoys I jostled with other guys, and started to warm up and feel the water a bit better. The guys alongside were taking different lines & correcting, with no decent group forming. I got squashed between them and then repeatedly clouted by the guy to my left with each stroke. I dropped back, swam over the other guy’s legs and got a hip draft on the clean side. I was probably better prepared for a 1500m swim than a 750m swim, but paying attention to the new route before the start payed dividends and the guys around me got lost in the buoys while I took a direct legal line to the swim exit. Nothing special about that swim.

A hard run to and through transition picked up a bunch of places on the slippery mud, with a clean bike pickup and a slip and a slide out onto the bike course. Which was amazing. I was probably a bit awestruck, but the plan I had was simple. Probably a good thing. The roads by now were dry, and we rode around Hyde Park, u-turned and returned carefully over speed bumps and guessing what the hell line people were going to take around bends as I tried to get around them cleanly. Marshals looking after crossings did a great job as we hammered towards groups of people crossing the road only for them to dissipate as we got there.

Later in the day the wind had picked up and we had a tailwind out of the park, out to Buckingham Palace (!), Westminster and then Embankment almost as far as the Tower of London. Roads were fully closed, wide and we rode on the wrong side of the road, overtaking on the left. Corners, straights, a tunnel, through Wellington Arch and past other famous landmarks, it was a crazy, fantastic bike course. This is what we had been training and competing so long for; a chance to ride this course. Only us standard distance athletes and the pros got to ride outside Hyde Park, and this bike course was every bit as good as it looked on paper. With the wind behind I was in 52×12, struggling to keep my head down and not look at London around me. At the turn you really had to tuck and drive into the wind, bearing in mind the reduced effort at the turns and bumps of Hyde Park. The second lap was even better, having knowledge of what was coming up. I had plenty of room, although I did see some groups forming the draftbusters on motorbikes were keen to break them up, I did a lot of overtaking and didn’t get caught by more than a few. I probably had a big grin almost all the way round (it turned to a grimace for the last parts of the second lap) and the official biking photo shows me looking at Buckingham Palace instead of where I was going. Awesome.

Off the bike and into the run you always feel good in a race like this. The probability of finishing becomes very high. This race was even better, with large crowds lining the run route and shouting your name or “Go on GB!” I had some club support too, which was very welcome. I was very focussed but I heard it all and it helped. My Garmin had done something weird in the first transition and all I’d been able to get out of it was the time elapsed, so I had no idea of how fast I was moving, heart rate or lap times. I pushed hard, I was focussed, I had good technique, and it got harder and harder with each lap.

The first lap is always a bit of an unknown even having walked the course, depending on how your legs feel and how well you’re moving. The second lap is clearer but it hurts knowing how far you still have to go. The third lap is all you can muster, hoping to get it all out. Again, there were lots of athletes out on the course and I did a lot of overtaking, some in my age group, most not, and I was only caught a few times. I grabbed a flag before the line chasing a Mexican fella but ran out of road. I was pipped at the line by another GB athlete. I hadn’t seen him coming. A lesson for next time.

My major aim this year was to get to this race, and then to complete it. My training later in the season has gone well after making some mistakes earlier in the year, and I thought I had some pretty good form. My run was still slower than I would have hoped so that needs a lot more time and many more miles. I could have been a little more professional in my approach and during the race, but I’m happy to save that for next time when my aims and fitness kick up a notch. This race has been ticked off, done, completed. I have the medal and I had my family at the roadside cheering me on and seeing what I get up to when I go away to race. Brilliant fun.

This was a huge event for London to host and I am very grateful. It was a once in a lifetime deal that inspired the fastest, most competitive season of British age group triathlon racing ever in the shortish history of the sport. I’ve spent a ton of money in London, and when I booked the hotel there were almost no rooms left available near Hyde Park. And that was from a list of around 450 hotels. People I spoke to when I was preparing for this planned to come to London to watch, not just us age groupers but also the best triathletes in the world racing for World Champion titles. People came from all over the world to race (and stayed to see the rest of it) and London has been on the lips of triathletes around the world since the Olympics last year.