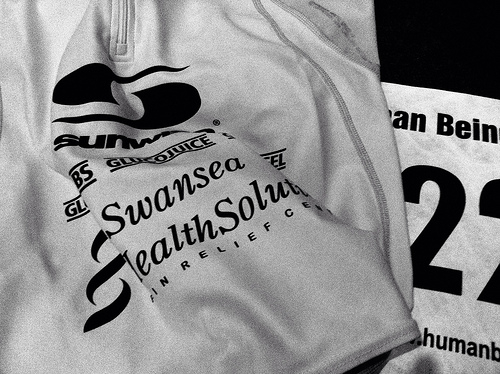 Wow, it’s the first race of the year already. It’s a bit early and I’m not anywhere near race form yet but the Llanelli half-marathon is a good tester and gets some race pace into your legs. Last year I was ahead fitness-wise because of an early European Triathlon Champs in April, but for 2013 I won’t be peaking until June. I think I’ll have a time and pace in mind, will start off sensibly (ha, as if!) and see if I can finish the second half of the race strongly. When your focus is a 10km run for most of the year you forget how bloody long a 21.1km race is.

The course is new this year so I’m not sure how times will compare. The new course is still by the sea on the coastal path but mostly on a different section. It should have a bit more protection from any wind, it’s a little flatter, but long stretches have a loose fine gravel surface. The start and finish will be in the Scarlet’s rugby stadium. The organisers have asked athletes to get there 2 hours before the race which suggests they expect some traffic congestion. That’s a surprise as I thought that big sports stadiums had that sort of thing well thought out. I don’t fancy getting there at 7am just to hang around for a couple of hours.
The new course suggests that it will be hard for spectators that travel with the athletes to see any of the action. They’ll only really be able to access the start and the finish. On the old course they would see the start, the 8 mile mark and the finish without having to move, so they could see the whole race pass in front of them. It might not be worth the family coming with me this year to just hang out in the stadium or thereabouts for the morning.
Time to think about pacing and what to wear. Go hard or go home.
If you’re also racing have fun!
Links
Llanelli half-marathon website