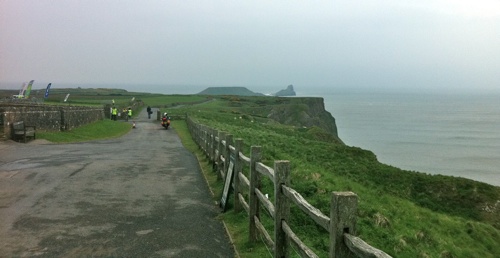 My excitement building up to the first multisport race of the season was fairly well deserved. It was a windy, early start on the western tip of the Gower peninsula at Rhossili, but the forecast rain didn’t really bother anyone too much. The wind had died down a touch from the projected 20mph+ too.
Warming up my right calf was immediately painful, which wasn’t a great start, and I didn’t give the time to a thorough warm up that I’d meant to (it was a 5.30am alarm & 6am get out of the house, and I still didn’t have time for a proper warm up). I started the race steadily at the back of the pack, and breezed through it on the downhill sections. There was a lot of pain in the calf in the first km and I thought my race was going to finish before completing the first lap. By the time we’d followed the gravel path and sheep-trimmed grass out to the hut on the point muscles were softening, and the climb back up to the start area went ok. Great! I settled into a steady tempo pace for the 4 laps, picking up places and increasing gaps with each downhill section. I think I was in 6th position by the time I got to the bike.
I really hadn’t thought that I’d make it to the bike, so I was pretty chuffed and had to remind myself on the run what to do in transtion. On the bike my calves would be ok, and my sole aim for this race was to bike faster than last year, no matter what the conditions were like (last year they were beautiful, cold, sunny and fast). I also recorded the quickest transition times for T1 and T2, so I did something right! 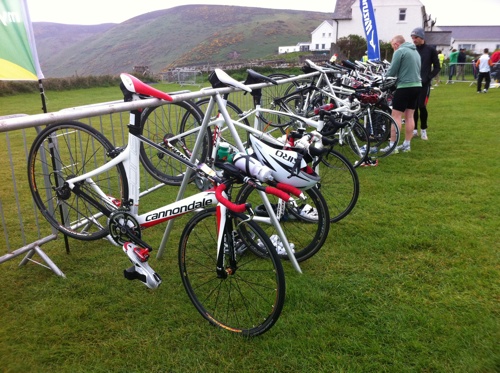 I had a cracking start out on the bike with feet on tops of shoes until it flattened out, and picked up a couple of places right at the start. I pushed the pace hard most of the way round, aiming to find my limit and my optimal pace over 40ishkm for future races this year. I probably pushed a bit hard in the first half, and the climb and descent over Cefn Bryn were both nice and tough into the strong ESE head/cross wind. I got myself into second place on the road a little after Cefn Bryn and probably eased up a bit too much when I turned back with the tailwind. I had a few issues with gear indexing (even though I’d adjusted & tested it all the day before) and covered my gear levers in gel when I squeezed the packet too hard, but nothing that caused any major problems.
In 2010 my legs died coming up the last climb out of the Three Cliffs valley as I hadn’t been out of plaster long, and this year I was strong but got caught a little after the top by a fella with big legs. Fair enough. Pushing my effort I got caught again a little before we got back to transition, and my calves were beginning to cramp. Worried that when I got my running shoes on those troublesome calf muscles would fail and leave me only able to hobble I gave them a little stretch on the downhill sections (there ain’t a lot of flat on this bike course). Bizarrely when I blasted through T2 I had no calf tightness at all. The final run was not fast, but my calves were working pretty well. Great! The lack of running this year showed though & I couldn’t catch the lad in front, and I was caught and overtaken by the fella in 5th place as he moved through all of us to get 2nd by the time he hit the finishing line. Awesome running! 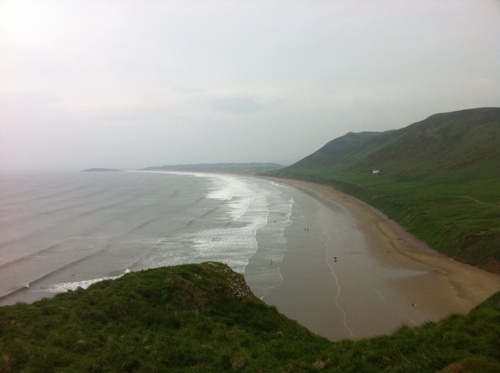 The final run takes you around the tops of the cliffs to Fall Bay, which is lovely if you’re not just looking at your feet, rocks and grass the whole time. There are some steep sections that I was a little precious on, not wanting to stretch, strain or tear anything given my recent ‘injuries’. Cramp in my quads, hamstrings and calves (but the good cramp in the calves, not the tetanic, muscle killing, massive medial gastrocnemius pain I’d been getting recently) and a good gap behind of some minutes to 6th place meant I could ease a little to the finish line. 5th place and almost 2 minutes quicker than last year, on a windy, windy day. I’ll take that.
So I met my aim of biking faster than 2010, but only by 30 seconds. With the conditions of the day I’m happy with that. My running was actually quite good, considering. I finished too, which I really wasn’t expecting, so 5th place is a good spot. There were some fast boys out, and Oliver Simon squarely schooled us in how it’s supposed to be done, going ahead in the run and then off into the distance on the bike. I don’t think I even saw him coming back on the 2nd run and he won by 5 minutes. In comparison there was only 1 minute and 10 seconds between 2nd place and 5th, after 2:12 of racing. Nice!
Thanks to Tri & Enter and DB Max for a good morning out. It was much, much pain this year.
DB Max Moti Gower Duathlon 2011 results:
http://www.dbmax.co.uk/assets/results/445/original/olympic_web_results.html?1304763370 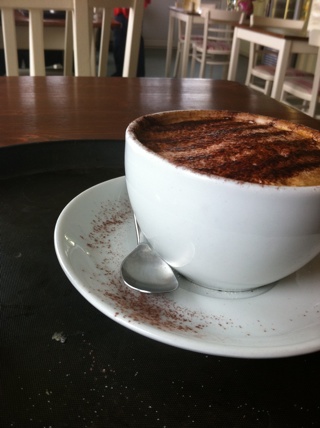