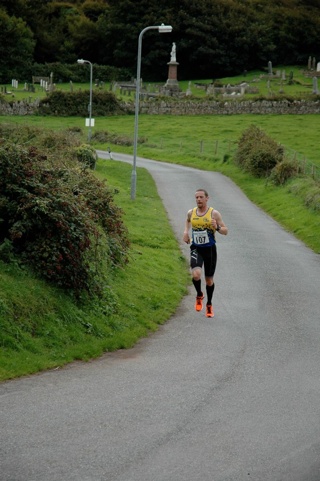 So that went well! I got 3rd place overall at the Dale half-marathon, organised very well by the Pembrokeshire Tri Club. I was the first back in my age group (17-39?) so was beaten by two vets and as such I was given the 2nd prize. Confusing? Winner was 1st vet but got overall 1st prize, 2nd place got 1st vet prize and in 3rd overall I got 2nd overall prize – this race has a method of making sure as many people as possible get a prize and that each gets the best prize possible.
It’s a very hilly race and I was very happy with my restrained pacing in the first half of the race and up the first hill. I felt pretty good, pulled some gaps on the descents and then stretched the gap between 3rd and 4th to something like 4 minutes. I caught sight of the runner ahead on the second main climb and chased hard to try and catch him on the descent. I didn’t quite make it but was chuffed with my strength and some decent gutsy running back to the finish. I feel the mental aspects of my running is still improving. 1:22:36 I think. I wonder if I can get a 1:21 next year.
It looks my lactate threshold has risen this year, and it was important that I ran on feel & not by numbers. If I’d run at the pace suggested by my lactate threshold heart rate of a few months ago I would have run unnecessarily slowly.

After Dale we stopped off at Wiseman’s Bridge to see family that had been staying there for the last week. We went there a few weeks ago for a week’s holiday so the kids loved going back to the beach and rockpools & getting to play with nana, uncles and aunt.
I’ve got the Devil’s Aquathlon this weekend, and although it’s a new race it sounds like there will be some quality competition so I’m hoping to recover for that, but also keeping the running up for the Cardiff half-marathon in a few weeks’ time. Tricky stuff. The Devil’s Aquathlon will include a 2km swim in the open air Lido in Cheltenham, a week after they switch the heating off (yipes!) followed by a 10km cross-country run up Leckhampton Hill to the Devil’s Chimney & back. I’m a little disadvantaged as I’ll struggle to pull back the time a good swimmer will take off me over 2km in the water in just 10km of running. It’s off road though, and has something like 250m of ascent so who know what might happen? I sounds like a lot of fun.
They’re raising money for the Lido itself and for Macmillan Cancer Support so if you can please sponsor me Â£1 or Â£2 on my JustGiving page: www.justgiving.com/Samuel-Webster.
Links
Flickr – Dale Half-marathon 2010
Just Giving – Devil’s Aquathlon
Cheltenham Lido & the Devil’s Aquathlon