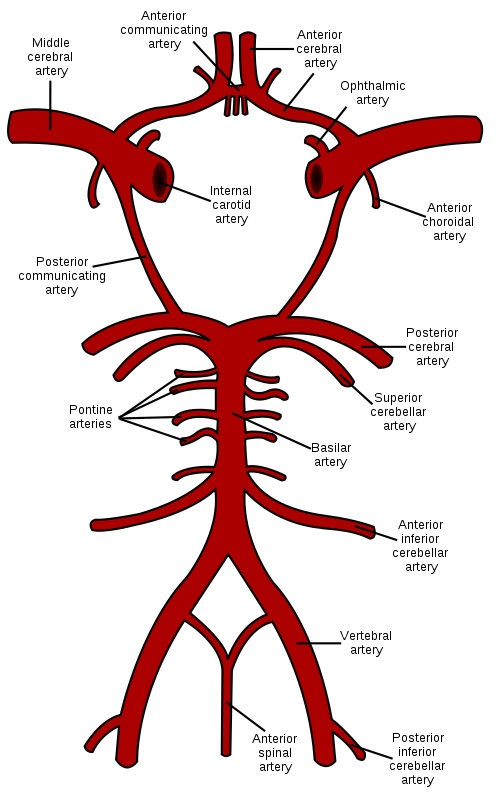 We saw the internal carotid artery end just superior to the middle and anterior clinoid processes (and isn’t it funny how when you put a pipecleaner in there that those processes seem to help form a circle that holds the pipecleaner/artery?) Here the internal carotid artery becomes the anterior and middle cerebral arteries, and part of the circle of Willis.
You can see from the photo of one of our plastic skulls (on the right) that they get marked up by students poking around in them with pens. Please don’t! They cost Â£100’s & aren’t easily cleaned.
We also talked about the other arteries that contribute to the circle of Willis: the vertebral arteries. These guys are the first branches from the subclavian arteries, and pass posteriorly to reach the cervical vertebrae and then pass superiorly, up the neck, within foramen within the transverse processes of the cervical vertebrae. So that will be another way in which you can identify the upper 6 cervical vertebrae then.
The left and right vertebral arteries enter the cranium through foramen magnum and join to form a single basilar artery that runs between the pons and the clivus. This sends off smaller branches to the pons, medulla and cerebellum (worth looking at these as interesting things can happen with cerebrovascular accidents here).
A branch of the basilar artery also passes to the inner ear. The labyrinthine artery is a branch of the anterior inferior cerebellar artery, which is a branch of the basilar artery.
The basilar artery ends by dividing to form two posterior cerebral arteries. All our cerebral arteries are linked by communicating arteries, providing a key example of anastomoses that have evolved to try and ensure blood flow to the brain is uninterrupted. All these arteries combine to form the circle of Willis that you saw a dozen times or more on Monday morning, and so should be etched into (if not under) your brains.
Links
Interactive skull images.
What is Cerebral Perfusion Pressure?
Sudden Deafness and Anterior Inferior Cerebellar Artery Infarction. (Lee et al, 2002).
Circle of Willis. Wikimedia Commons.