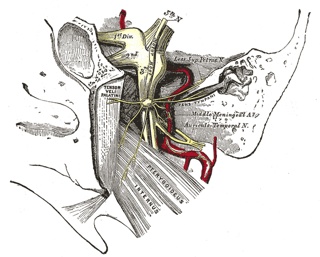 Ouch! That wasn’t a nice way to start the second year of medical school was it?
OK, so most of the session was about the tongue and salivary glands, which seem simple enough until you start trying to hook them up. Then you get into cranial nerves and the intricacies of head and neck anatomy. How many cranial nerves does it take to work the tongue properly? And how on earth do those fibres get to those different parts of the tongue? Fun stuff.
I talked about the otic ganglion in far too much detail, so here is what you need to know:
The glossopharyngeal nerve (CN IX) sends a bundle of preganglionic parasympathetic nerve fibres across the floor of the middle cranial fossa and into the petrous part of the temporal bone.
Those fibres find their way through the middle ear and out of the skull into the infratemporal fossa.
Meanwhile, the third branch of the trigeminal nerve (CN V) known as the mandibular nerve (CN V3) drops through the foramen ovale to leave the skull and also enters the infratemporal fossa. It sends a branch of general sensory nerve fibres called the auriculotemporal nerve out towards the ear and the temporal region.
The otic ganglion is found beside the mandibular nerve inferior to the foramen ovale. The preganglionic parasympathetic nerve fibres from the glossopharyngeal nerve synapse here and postganglionic parasympathetic nerve fibres pass with the auriculotemporal nerve out to the parotid salivary gland. They will convey secretomotor signals to cause the parotid gland to secrete saliva.
Got it?
I also mentioned the other parasympathetic ganglia of the head: the ciliary ganglion, pterygopalatine ganglion and submandibular ganglion. We talked about their associated cranial nerves, but you’ve met some of them and will meet them again.
The other point of note was that sympathetic nerve fibres pass up into the head by following the major arteries, and sympathetic fibres jump from the middle meningeal artery (passing through the foramen spinosum and therefore really close to the foramen ovale and the otic ganglion) to the otic ganglion and also pass with the auriculotemporal nerve to the parotid gland. Probably. Mostly. These fibres have vasoconstrictive effects. The sympathetic fibres are already postganglionic, and do not synapse in the otic ganglion.
Links
Want to review your cranial foramina (and bone and suture) knowledge? Check out my interactive skull.
Above image from: commons.wikimedia.org/wiki/File:Gray783.png