One blogs a lot less when one uses Twitter. This is so short it should be a tweet.

Finally someone found a use for lasers – showing cars how much space you need to give a cyclist!

With a lot of winter mileage due this year I’d definitely buy one of these. Drivers seeing something different would be woken up for a moment, if nothing else. It looks like it gives a clear idea of how much space you need to give a cyclist too.
Links:
– Gizmodo article
– Lightlane

I don’t run with music, but a lot of the information about data collection and motivation in this article about Nike+, Apple, and running sits really well with my own experiences.
Read the article: Wired Magazine, The Nike Experiment: How the Shoe Giant Unleashed the Power of Personal Metrics. 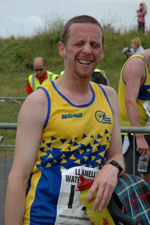 I raced again today, running at Llanelli, this time in the annual 10k race on the coastal path. The race report would be rather short, like the race: I ran hard from the start, trying to maintain a 5:45 min/mile pace (a bit of a big ask). I pretty much kept my place, if not my pace, running with a 93% of max HR average (will remeasure my LTHR next week) and finishing at 36:22. Bit bummed by the time (but sub 35 mins *was* a big ask) but happy with the result (6th place) and the new PB.
The story of the day was Jack running in the under-7’s race earlier in the day. He ran 400m around a grass course and under the same finishing banner as the big race and had a great time! He’s not quick, but he can keep going!

I’ve just started to notice that I don’t get excited by much or nervous about anything anymore. I remember that I used to but I’m not sure when this change occurred. Maybe it was a gradual thing.
Two current cases for this: i’m racing again this weekend but I never have any nerves in the build up. My heart rate will be elevated on the start line but I won’t feel any adrenaline or nervousness. My body just gets prepared for the huge effort. Also, the new iPhone comes out today but the idea of rushing out, queuing and being one of the first to own it seems rather weird. It’s a nice gadget & these things help me do what I want to do but they’re not particulary exciting. Interesting, functional, attractive even, but not exciting. Yet many people got up very early this morning, travelled, queued and spent a lot of money on it.
I’m an Apple user & many people see me as an Apple fan. Apple products give me an opportunity to do & create some nice things, they work very well & they’re usually very nicely designed, but I don’t think I shout from the rooftops or force them upon other people.
It’s probably normal to not be excited by a new gadget then, but I am very interested in technology and the iPhone does seem to be the gadget that gets everyone excited.
After a race I feel satisfaction if I have accomplished something I regard as special, but I don’t think I’ve felt excited after a race since I won my first bike race. I used to get very excited within a bunch sprint but when all was done satisfaction or annoyance would take over depending upon the result.
I’m a lecturer so I’m very used to speaking in front of groups of people. I’m not particularly concerned by what people think of me (although a psychologist delving deeper may disagree I suppose). Buying new equipment for whatever endeavour I’m involved in is often interesting but I can’t quite get more excited by one carbon fibre weave over another. They’re all tools to keep me warm, to help me go faster or to keep track of what I’m doing. I usually choose a brand & stick with it (Castelli on the bike, Polar for my heart, Saucony & Asics on my feet, 2XU for triathlon, PowerBar & High5 in my bottles, etc).
I set myself challenges that I don’t know if I’ll be able to achieve & I’m sure I get very enthusiastic about them but not excited. I’m hoping that when I’m about to get out of the boat into the English Channel, when I’m suiting up for my first Ironman, or when I’m on the start line for my first marathon I’ll be crapping myself, but I have a feeling that I’ll be very well prepared & organised, & ready for the challenge.
Don’t take this the wrong way. I’m having a huge amount of fun at the moment training, racing, working, bringing up two kids & planning fun things for us all in the future. It’s just that I’d noticed that the scares & the buzzes I used to get from rock climbing are no longer around. (I don’t want to get back to rock climbing either). The excitement of the bunch sprint has gone. Maybe it’s because I’m not contesting for a win at the moment. Maybe I’ve mellowed to an extreme state because of my past experiences (is this what Formula One drivers & BASE jumpers feel like?) or maybe I’ve developed ‘confidence’.
Through this exercise in reflection I remembered being nervous before my first game of golf with my dad on his course with his mates. That was a couple of years ago but it shows that it’s still possible! Since then I’ve learnt that controlling your nerves & state of mind is an important part of golf, as it was in climbing. I’m pretty comfortable on the first tee now. Trying new things may be important.
Hmm. I think I’m still striving for that old buzz, through adrenaline (hence the interest in nervousness & excitement) but like any drug you need a larger & larger dose to feel the same effect. I wonder if it’s even possible, particularly without mortal risk.
I think I’ll have a lot of fun striving for it anyway. Have you experienced the buzz? Since I’ve killed the comments you’ll need to Twitter or email me.

See? This is what I’ve been talking about. 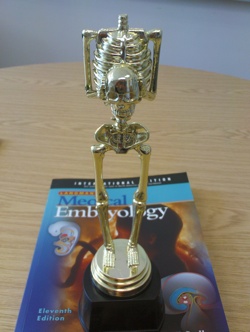 So that’s it, the embryology lecture series has finished. The final result of the quiz series was a draw, with the boys winning the final lecture quiz to level the series at 5:5.
Given the really simple nature of the first couple of questions (and my awesome animations that I created to teach neurulation) I have a feeling that the boys may have been cheating. I’d expected more than 90% of the group to get the right answer, but only 77% were correct. I think some boys had signed up to the girls’ team and had put in the wrong answer deliberately. Should I state this publicly? Medical students cheating? The quiz had a large element of fun and competition to it, and at no point did I take it too seriously or expect anyone else to. I’m confident that if I’d asked the student group to play seriously and fairly they would have done so. The aims were to reinforce key parts of the lecture for the students and to give me immediate feedback about how much students had actually taken in (shockingly, apparently sleeping students often listen very well – there’s probably a medical education study to be done there). So a draw seems fair, or unfair. I don’t think it really matters.
Next year I’ll rethink the methods to try to limit the cheating, but it’ll still be done none too seriously. If we ever get those Windows Mobile PDAs connected to the network (or if the next student intake all get iPhones) maybe we’ll be able to add some new interactive stuff with the software version of Turning Point. I’ve got a bunch of new ideas floating in my brain too (not sure where though, my neuroscience knowledge is poor).
Unfortunately, with the new course much of the embryology lecture series will evaporate and I’ve still not finished fitting new lectures into the new timetable. The series will be shorter and will probably extend over 2 years. That may be too long to run a competitive quiz series like this. Maybe the decapitated skeleton trophy will stand forever in a draw(er), never to be won by either side. 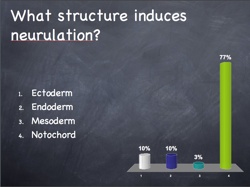 I really enjoyed giving the embryology lecture series this year. I was able to incorporate some of my own experiences from Annabel’s preterm birth to (hopefully) give a personal introduction to the subject and highlight the clinical importance of this area of biology. The quizzes were fun to do and generated buzz unusual for an embryology lecture theatre. I think we linked the embryology and the anatomy fairly well this year, and I believe that the student group has a good grasp of the important elements of development.
If you were a student this year, thank you for being involved in these lectures and for your helpful and very positive feedback. It really does affect what I do in the future.
Two more anatomy sessions and (apart from the exams) we’re done for year 1.

There’s an article on the BBC website this morning covering a study that tested the lay population on their knowledge of anatomy.
“A team at King’s College London found public understanding of basic anatomy has not improved since a similar survey was conducted 40 years ago.
“Less than 50% of the more than 700 people surveyed could correctly place the heart, BMC Family Practice says.”
Article:
Basic anatomy ‘baffles Britons’

I’m not the only one thinking out loud about this:
Link – Fast Company article 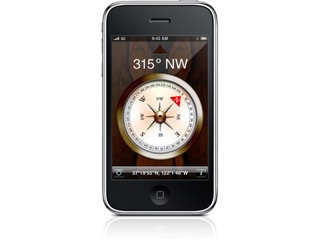 With the announcement of the iPhone 3GS on Monday it appeared to have only incremental updates. For me, it has finally reached the point where I could use it as my phone (a term that doesn’t just refer to a device for calling people any more). It offers me a lot more than previous technology, but importantly it now lets me do everything I do with my “normal” mobile phone.
That aside, I thought that the inclusion of the magnetometer must be a key indicator of the future. The digital compass application can use this to show you north. That’s very nice, but knowing north really isn’t that useful around campus or in most cities. Google Maps can also take advantage of the magnetometer to show the direction in which you’re facing. That may be helpful to people not as used to following a map as I am (although many would disagree here), but is it really worth adding this piece of hardware just for that? Consider how long it has taken Apple to put a half-decent camera into the iPhone, and that’s a really important part of any modern mobile phone these days. Is a magnetometer required for turn-by-turn directions, or will the future TomTom app work with the current iPhone 3G?
Is it for Google Maps’ Street View? I don’t know. It really looks like Apple and Google are working towards the next stage on from Street View though. Are they thinking about augmented reality applications?
Here are a couple of links to the sort of technology that I’m alluding to:
Mobilizy
Sekai Camera