Weird.
You’ll soon be able to buy Star Wars themed golf bags and headcovers, and who knows what else? I might go for the ball markers, I guess.
Official starwars.com article with more images. 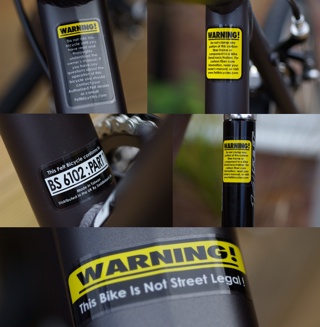 Going anywhere near this bicycle could result in a fatal injury or injuries!
How many warning stickers can you get on one bike? It must have been built for a particularly litigious society. Warning! Bicycle may move forward if you press on one or more pedals! 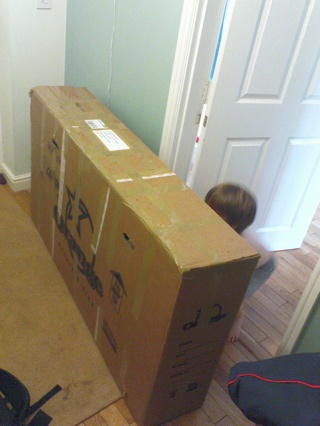 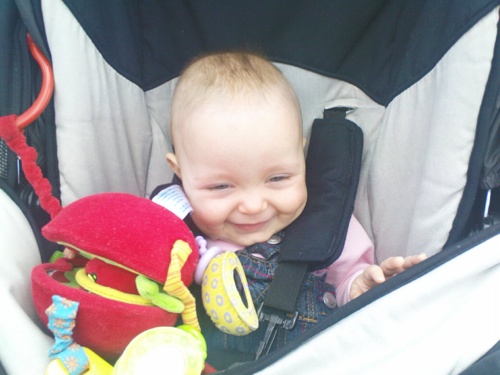 Annabel is now clapping and saying, “Dadadadadada”. Kind of. She’s very pleased with herself and seems to use it to get my attention.

Have you seen or heard about this? It’s the first global 10km running race.
I love the idea. You can sign up for and join a physical event, running with a large number of other runners at your closest geographical location (I think it’s London in the UK at Wembley Stadium with Paula Radcliffe and 30,000 other runners) or you can sign up online and run on your own or with a few mates on your home turf using the Nike+ iPod running system. When you get home you upload your run data to nikeplus.com from your iPod and it’s added to everyone else’s collected data. It looks as though they’ll be ranking by runner and country, and no doubt there will be a whole bunch of interesting data.
My sister bought me a Nike + iPod sport kit a while ago, but it only works with the iPod Nano. I’ve avoided buying a nano just for running as rumours keep surfacing about software for the iPod Touch and iPhone, which given its new abilities seems sensible. I’ll definitely try it out even though I already use the awesome Polar S625x for all my cycling, swimming and running duties. It’s great to see someone like Nike making it easy for runners to get direction in a fun and easy way. It’s far more likely to keep people running with goals and milestones, and might get them to enter races, even if they’re only fun runs.
I wonder if Nike do Ironman training programmes yet…
Nike+ Human Race 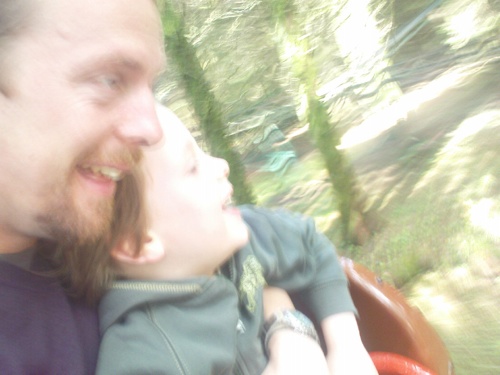 We all went to Oakwood Theme Park yesterday and as you can see, Jack loved it. At the end of the evening we sat on the Treetops rollercoaster for 6 straight rides through fir trees in the dark! I’d been treating myself to doughnuts, ice cream, chocolate, beer, & more doughnuts, so I was feeling a little iffy after that.
Flickr.

I have a personal plea. If you’re going to watch films from the iTunes Store (link opens in iTunes) and feel that you need to comment, can you please shut the hell up about the price? It is not expensive.
Every film I’ve rented or bought from iTunes has a huge list of reviews, and those at the top all complain about the price. “Whine, whine, whine. Why do I have to pay Â£10.99 to buy a film? Wah, wah wah. It’s cheaper to leave my house and walk to a shop, or go to an online shop, buy the DVD, put it in my computer, download some software from the internet, install the software, fiddle with the settings, rip the film to the hard disk, resize it for my iPod, and then transfer it to my iPod.” You’re missing the point, whacko’s. You’re paying for convenience. And when was Apple ever cheap, you poor babies? You want cheap? Go to Poundland. You want quality? Go to Apple, or B&O, or some other damned expensive company.
Apart from that, you’re wrong about the price too. Cloverfield on iTunes costs Â£10.99 to buy, as do all their newer films. Amazon is selling Cloverfield on DVD today for Â£11.98. Play is selling Cloverfield on DVD today for Â£11.99. This film was released on DVD on June 9th, according to Amazon, so they don’t get cheap quickly either. “But what about the extras you get on the DVD?” That’s what a DVD’s for, you dumbass.
So stop thinking that you’re making a difference by posting your dumb comment. And don’t think you’re helping by marking these whiner comments as helpful either, pushing them to the top of the list. Go to Amazon or Play and moan there that you don’t want to pay Â£11.99 and tell them to make it cheaper. See how far that gets you. At least it gets you away from me. 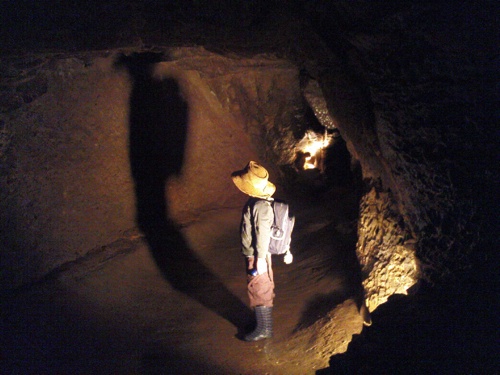 We went to Dan yr Ogof Showcaves today, and it was superb. Jack got to live out some of his Indiana Jones fantasies, and we went round and round the caves. I was impressed by how much was there, and a little surprised by how much Jack enjoyed himself.
Kim’s done a little bit of caving in the past but I’ve always disliked the idea. I’ve been to other tourist caves before, but after today I’m probably a bit of a convert. It would be fun to explore some of the extensive cave system that you wouldn’t get to see as a paying customer.
More snaps on Flickr.