I’m taking the commenting system offline for a while to cut out the recent high volumes of comment spam I’ve been getting. I’ll put it back on soon.

The BBC have written an article on their webpages reminding us why we have to be careful scientists when we interpret our data, and why we use double blind testing.
The article talks about a scientist named Jacques Benveniste, who was trying to understand homeopathy in the late 80’s. His data was published in Nature, suggesting that his work was of the highest quality and importance. His findings were difficult to repeat (read the article for more).
This harks back to comments I make in an early lecture about the homunculus of spermists seen by those with early microscopes. Be careful of what you think you see – it might not really be.
BBC article. 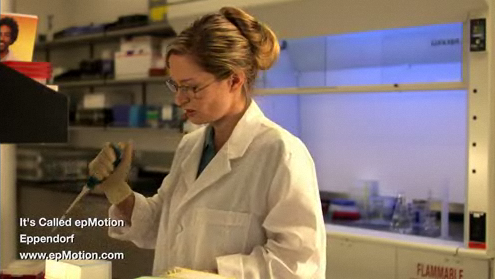 I am loving this. If you’re a lab rat I hope this bit of advertising from your favourite pipette supplier tickles you.
Click the link: Epmotion Ad.

A couple of buddies of mine will be swimming the length of Derwent Water in the Lake District this weekend to raise money for charity (and for bragging rights). The length of the lake is a little over 5 miles, and the swim is likely to be a touch longer than that. It’s a cold swim, with no wetsuits: just speedos and lard.
If you’d like to sponsor them (and Matt is raising money for the Welsh kids hospice, Ty Hafan), please click on the links below. Even if it’s just a quid or two, they’ll really appreciate it. Rich is pretty unlikely to do anything like this again.
Sponsor Rich (St Margaret’s Somerset Hospice): justgiving.com/richbirks
Sponsor Matt (Ty Hafan): justgiving.com/matthoughton
Find out more on their Facebook group.
Interestingly, I looked at both Derwent Water and Swansea at the same scale on Google Earth. The lake looks bigger than Swansea, and the length of the swim is about the same as my daily commute to work!
Hopefully I’ll be able to link to some photos of this soon after the event. Now wouldn’t this be an ideal thing to Twitter about from your mobile phone in the support boat? 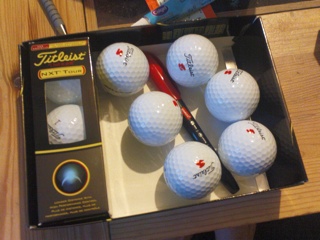 I think I got rid of most of these over the weekend. Surprisingly, I actually wore a couple of them out, and didn’t put them all in hedges. Well, on Sunday anyway. 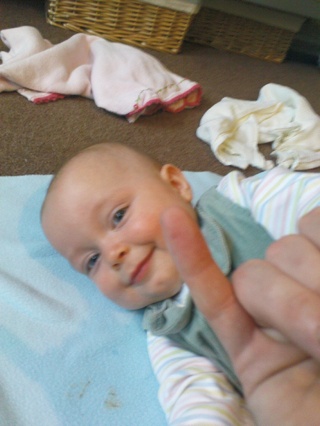 Annabel has her two lower front teeth, as shown by the mark in my finger. They’re sharp too!

Have you noticed the new bar on the right hand side of this page? I’ve entitled it, “Twitter”, and it list some very short posts about random stuff that I’ve been doing. If you’re a Facebook friend you’ll see the same list on my profile page, above my Wall. You can see the same list on my Twitter page, at twitter.com/samuelwebster.
So what is it? This YouTube video explains it far better than I ever could:

I’ve known about the idea for a while, but after chatting with the Swansea and Gambia students after the recent Wales Africa Links conference I started to think about ways in which these guys could keep in touch. They’re on two radically different continents, but are forming friendships that they want to maintain as their education and careers progress. New students want to make new friends, and students want to know what happens in medicine in the two different countries.
In Wales we have fast, reliable internet connections. In The Gambia most internet connections are slow and unreliable. Emails and blogs could be a way to keep in touch, but can also take up a lot of time. So what else is there? In West Africa mobile phones are far more common that landlines, and possibly more reliable. How can we use that?
I signed up with Twitter to try out the service and the idea. I’m already used to posting all sorts of crap on this blog, so Twitter wasn’t too scary. It’s much easier to use than a blog though. It’s very simple and instant to setup, and it’s incredibly quick to add to as you can send texts from your mobile phone (which costs no extra than whatever your phone provider charges). You can receive updates from your friends that you follow on your mobile phone if you wish, or on a web page. You can follow many people, and invite people to follow you. Could this be the way to form up to date links between The Gambia and Swansea? I’ll put it to the students and try to get them signed up. 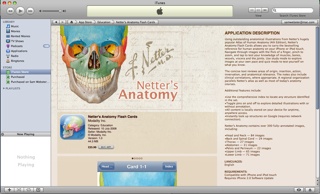 The App Store in Apple’s iTunes application has gone live today, and there are lots of very nice things in there. The free remote application is very nice, allowing you to control your computer or Apple TV from a distance. This might be something else I can fox students with in lectures.
One application we’ve been waiting for since seeing Steve Jobs’ keynote presentation at the WWDC (IIRC) earlier this year is Netter’s Anatomy. There are a number of medicine based applications due for this new platform, but it’s great to see that an anatomy resource is regarded as so useful and important. It’s priced at Â£23.99, is 44MB in size, and has over 300 anatomical images that you can flick through using the touch screen interface, has an index and a search function. The images are annotated by Google Maps-like pins, and it apparently links into Google’s search engine for more information about structures. There is a second, separate app for the same price that uses neuroscience flash cards.
That seems like pretty good value for money, so I’ll hopefully buy myself a copy for teaching tomorrow.