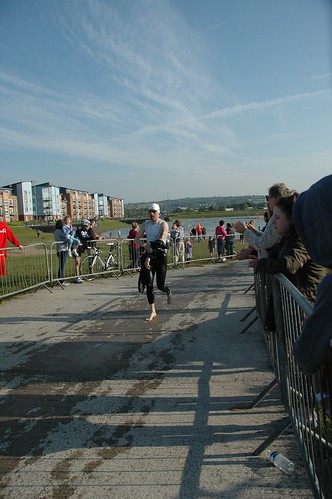 We had some fantastic weather for the start of the triathlon season here in Wales, so I was glad that I’d entered the Llanelli Sprint Triathlon. It’s only 5 minutes down the road from my house, and on routes that I train on, so it makes a good end to my build phase of training. Hopefully it’ll help get some race speed into my legs, along with the Whitford Point off road race on Wednesday evening and the Gloucester Triathlon on the following Sunday.
The family got up at 5:30 am with me and we were at the race by 6:15. A new family record? Although I’d been spectating at the paratriathlon the day before I’d missed the packet pick up, so registered quickly, put my bike together, tested the gearing and adjusted the brakes (damned fiddly aero tolerances) and got set up in transition. I started in the second wave, which I think was mostly veteran athletes of 40-years-old and older (that’s me this year too). I had plenty of time for a warm up. Getting in the water before the start and moving and feeling the water is crucial for me.

I started in the middle to see what would form to my sides, and started strong and, I think, stroking well. It was soon just me and another swimmer, so I moved to his hips and then his feet and stuck there for the rest of the swim. The start had been harder than I’d thought and it felt like a big effort to recover and maintain pace. I was very happy to be 2nd out of the water in my wave but looking at the data it wasn’t a terribly fast swim. I’m putting a lot of work in this year and I’m hoping for more, but it’s going to take months and years, and a lot more open water swimming to get my speed up. I’m holding the water better and recognised things I was doing wrong during the swim and corrected, so that was good.
I got a foot stuck in my wetsuit in transition so my target got 20 seconds or so on me on the bike, but I caught him well before the turn. The bike worked fine, and the Campagnolo shifting has a very nice action. It’s always satisfying to plan and build your own bikes and to have them work out. 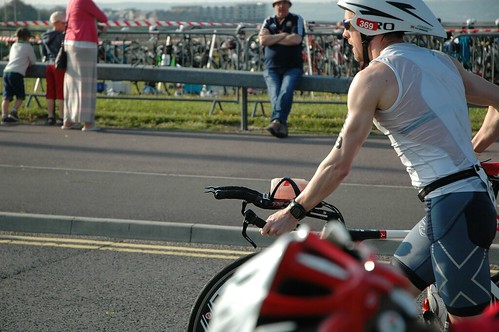 I misjudged the wind a bit and had a hard time coming back into the headwind. I think I got suckered because the prevailing wind is a headwind out, not back, and I hadn’t really switched my brain on. I didn’t feel brilliant but the bike leg was ok. A power meter on this bike would help my post-race analysis.
Off the bike, new shoes on and into the run. There were lots of shouts for me through transition, which was great, and I’d almost caught and passed everyone in the wave ahead of me. Being a wave staggered start I had to run hard, time trial style, because I knew the guys in the last wave would be fastest. My aims were to be the 1st vet 40+ athlete and in the top overall, but there were a number of fast names on the start sheet. The run out was hard, but felt pretty good. I glanced at my pace briefly and it was good. My left tibialis posterior muscle has been giving me some problems recently but it was mainly ok. It was just a bit more pain lumped on top of all the other pain.
I caught a few more athletes, and passed some club mates with barely enough effort spared for a thumb wiggle. The run was hard, but it was good. I often enjoy the run, for some reason. It may be a mix of running fast and coming to the end. Finishing a race always feels good. 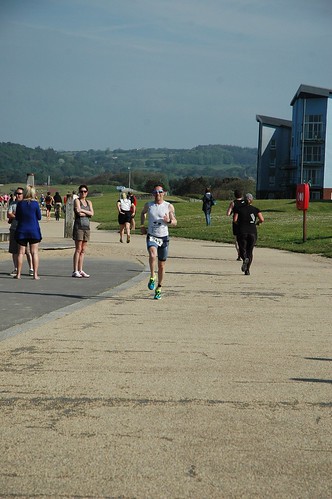 I was the 1st veteran home, but had to wait a while for wave 4 to finish. That put me 6th overall, which considering the names ahead of me is ok. Those guys showed me how much faster I need to swim. And run. And bike. But hey, that’s the fun.
So my first triathlon at 40, and it felt just like a triathlon at 39. I’m confident that I’m faster again this year, and there’s plenty of good competition around. I’m not sure of the etiquette here though; do I get to say I won the V40+ race? 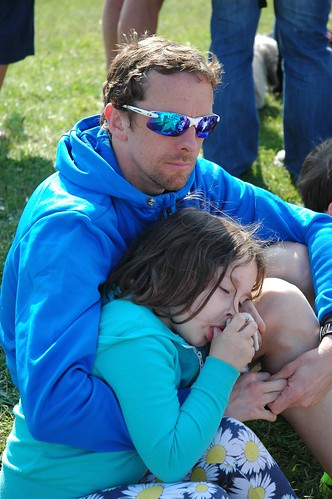 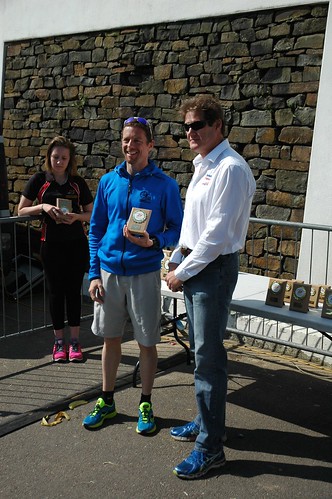