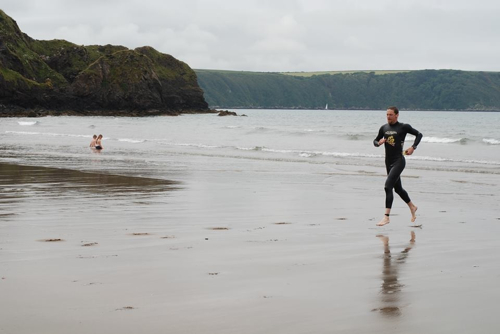 Between the European Triathlon Championships and the British Champs this year there’s a tricky 4 weeks of working out how to recover, kick the fitness on, and try to “peak” again. There’s not much you can do or expect from 4 weeks, and as you dropped most of your training load & fatigue for the first race you can probably hit it quite hard fairly safely depending on your robustness and try to recover some fitness for the second race. One way to help with this is to smash out a race in amongst the short period of training, and this year the TriExercise Pembrokeshire Coast Triathlon sat perfectly in the calendar. It’s a great race; a very hard course with very tough competition, a beautiful swim and run and an excuse to spend some time down the road in Pembrokeshire. It’s a race I’d always try to fit in. And the kids love camping.
The race had a late start to match the tides, and the roads we race on are largely out in the countryside and not heavily used so it doesn’t get busy late in the day. I’ve been reflecting on my performances so far this year, feeling strongly that I’ve been missing something. I’ve also been reviewing my data and some recent research and came up with a handful of changes to make to my preparation and to the race itself.

The swim is a running beach start (awesome) but I’ve got a wee issue with a small ligament in my right ankle that made it difficult to lift my feet out of the water and land as effectively as I would like. I’d prepared for this and probably dolphin dove the start more than those around me but it worked reasonably well and got me towards the front and into a good group. There was a bit of a head wind out to the first buoy, and from the turn I stuck some feet in the chop. Cruise mode engaged.
With the chop it was tricky for some to see the buoys and we had some drifting side to side, but I followed the feet parallel to the shore, to the turn back to shore, and then turning again towards the final buoy. I was feeling good & wanted the group to push the pace a bit so moved towards the front around my draft, which had the desired effect of the other swimmers raising their pace. I settled back in, turned at the last buoy and then swam for shore as long as I could, hands scraping the sand to avoid having to run and lift my feet too high. There was a great crowd by the swim exit and Kim called out my swim position as 9th. Not great, but that’ll do fine.
Out of T1 and straight into the first hill. Great to get the bike legs working out of the saddle and I could see 4 or 5 fast looking guys within range, who I picked off over the next few miles. After that I got into the routine of big effort with bigger out of saddle efforts on each rise, and trusting that none of the bends were too sharp, hitting them fast. Nice to see I can still go round corners fast when racing. I threw my previous pacing schedule away and hit this hard, coming off the bike in 3rd position. 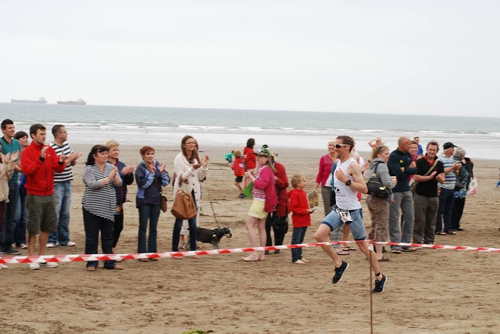 The run out across the beach at Broad Haven was with a relay team member on my shoulder, but climbing the steep coastal path and looking sideways back along the beach I could see that there wasn’t anyone else around. That presents a tricky problem mentally, and I was quite happy with the way I ran down the relay runner in 2nd place at about 6 or 7km, putting me in 2nd place overall. I kept the effort high to the finish aiming to beat the me of 2012 and finished in 2:20, 2 minutes quicker than last year.
It was an awesome feeling to see that the changes I made worked, and that the fitness is there waiting to be drawn out. The trick is working out how to get it all out as effectively as I can over 2 hours. After such a long break from racing after fracturing my clavicle in July last year my legs and body have needed to get a bit of racing in them. Theory and training only take you so far.
As usual, this race was so hard that I really didn’t fancy doing it again next year, but I know I will. I’m already looking forward to it. There’s talk of moving the course to the original course for 2014. Sheesh. It’s a hard one but it’s very rewarding if it goes well. 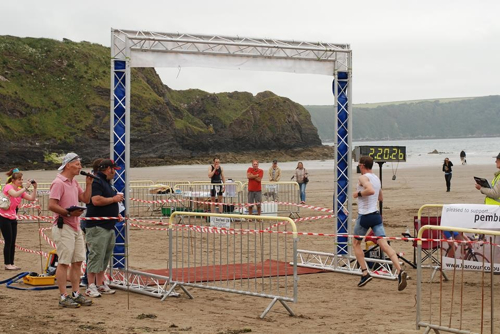 Photos from Gwenllian Hughes – thanks!