The year of biking and swimming 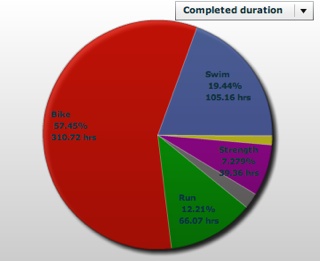 This year I wanted to focus on biking and swimming in training, as my running was ok and I could make the greatest gains by improving my bike leg in triathlon. I needed to improve my swimming to give myself a chance of catching the leaders on the bike.
Looking at the year so far it has really been bike focussed, and that shows up again in my race results. Last year my bike split positions were way behind my finishing positions, but this year they’re similar. I.e. if I finish 3rd overall, I also have the 2nd, 3rd or 4th fastest bike split of the day. Last year it may have been only the 10th or 12th fastest bike split and a finish of 5th or 6th overall.
Look at the hours spent in the pool though: 105hrs in the water vs only 66hrs of running. The running has really been inconsistent this year because of calf troubles (fingers crossed, touch wood, turn around 3 times & stroke a black cat: my calves seem to be getting stronger now) so that’s really kept the volume down. Within those 66hrs there really isn’t a lot of speed work either. Less time pounding pavement means more time pulling laps in the pool though.
I’ve knocked another 30 seconds off my pool 1000m time trial this year, and had a great swim at Windsor so my swimming is improving. It would improve faster if I swam with a club, or with a regular coach, but that’s not possible given the scheduling of the rest of my life. I’d still like to get in the pool more often though. 6 swims a week may be a target for a portion of next year. I can still probably improve my triathlon results more by getting faster running than swimming, but my swimming needs to keep improving.
Overall I should have knocked out around 700 hours of training this year by December 31st. Hopefully the run volume will have come up a fair bit by then, but only if I’m healthy.