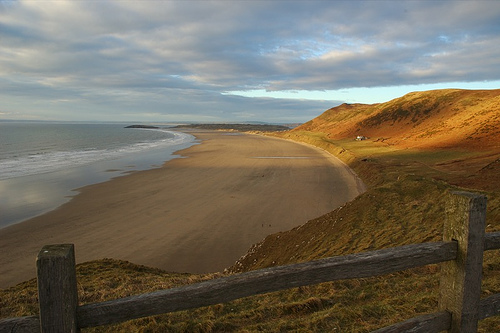 Tomorrow is the first multisport race of the season for me, and will be quickly followed by another two this month. They’re training races, getting me prepared for the summer, but they’re also great fun and it’s fairly important to perform well in them. Tomorrow starts early with the Gower Duathlon, running from one of the greatest scenic views in the world at Rhossili on the Gower. The weather is predicted to be windy with heavy rain showers, which is a little more typical of the area than the sunshine we’ve been having recently.
My goals for the race are simple, but the real test will be in my calves. Will my calf muscles survive the first 10km without locking up? Will I get to the bike? When do I stop if they start to tighten? Right now they’re feeling good. Rest from running, work from my sports therapist, foam roller work, and specific stretches hitting the problematic muscles have all helped them recover well. They’re a bit tight after a hard set in the pool this afternoon so I’ll work on them again tonight, and then again lightly in the morning before driving to the start. No-one knows if they’ll cope with the pressure of the terrain and the speed, but in the past they’ve been better running fast than running slow. In the past they’ve also locked up without warning.
So it’s a test. Not of endurance, not of finishing or placing, but of muscle repair in time for the new season. Wish me luck.