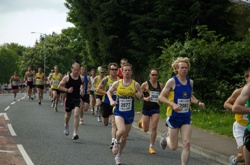 On Monday we looked at the anatomy of the lungs, with respect to differences between left and right, lobes, fissures & anatomical relationships (and the heart in particular).
To discover lung anatomy we used models, prosections of individual lungs, lungs with the heart and great vessels attached, and looked at a cadaver with lungs in situ. We saw that the left lung had a little less space than the right lung as the left ventricle of the heart projected across to the left side of the thorax. The lungs became very thin anterior to the heart, filling as much space as possible between the heart and the thorax, and we found the lingula in each of the specimens.
We saw that the larger right lung has 3 lobes (superior, middle and inferior) separated by fissures (horizontal and oblique). We got a good idea of the real sizes of the lobes by looking at the extracted lungs and by using the Visible Body 3D models. We also got a good idea of where the lungs are with regard to the ribs, and noticed that the apex of each lung extended into the neck. Looking at the left lung we found that it had only 2 lobes (superior and inferior) separated by an oblique fissure. We mentioned the connective tissues surrounding the lungs (visceral and parietal pleura) and how separate they are from each other and from the central structures in the mediastinum. 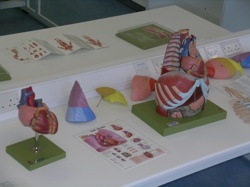 Looking at the cadaveric lungs we tried to work out which part of the triangle was the apex. By finding the hilum where the airways and blood vessels entered and left the lung we found the medial surface, and then by finding the dome-shaped surface of the base of the lung where the dome-shaped diaphragm would lie we found the inferior surface. From this it was then clear which were the anterior, posterior and superior surfaces. We also found a large impression in the left lung made by the heart and a groove curving along the medial surface of the left lung that was made by the aorta. The prosection of the lungs, heart and great vessels made this clear (and we had a hunt for the inferior vena cava on the right, inferior part of the heart and also found the oesophagus running anterior to the aorta, noting its longitudinal muscles apparent on the surface linking to what we saw in the histology sessions in previous weeks).
For our next trick we looked at the hila of the lungs. We could see several tubes entering and leaving the lung at the hilum but could only really guess which were the bronchi, pulmonary artery and pulmonary veins, especially as all of these tubes branched rapidly either as they entered or just before they entered the lung tissue. Hmm, what to do?
By looking at the parts of the heart and reminding ourselves of the flow of deoxygenated blood into the right side of the heart, out through the top of the heart through the pulmonary trunk and into the lungs for oxygenation, and then returned to the left side of the heart by the pulmonary veins before being pumped around the rest of the body we could decipher some of the hilum’s structures. The pulmonary artery must be the more superior tube as the pulmonary trunk is the most superior structure of those to choose from. The pulmonary veins are the more inferior tubes, as they return to the left atrium, which is lower than the pulmonary trunk. The trachea and bronchi are posterior to the heart and blood vessels here, so the remaining tube must be the main bronchus. We confirmed this by prodding the suspected bronchus and could feel the hard cartilage rings keeping it open. Good stuff – if we remember the anatomy of the heart we can work out the structures of the hilum of the lung. 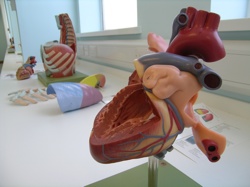 Finally we briefly mentioned the lymphatic drainage of the lungs. The respiratory surfaces are kept “moist” to facilitate gaseous exchange, but this fluid must be drained from the lungs as it is constantly added to. We noted that there are pulmonary lymph nodes deep to the hilum and bronchopulmonary lymph nodes at the hilum that fluid will drain to. The fluid continues on to carinal nodes (the carina is the point where the trachea splits into 2 main bronchi) and ascends through lymphatic vessels and nodes alongside the trachea, before linking to parasternal nodes and draining back into the systemic circulation through right and left bronchomediastinal trunks and the thoracic duct (on the left). Why do we need to know this? Lung cancer spread and pulmonary oedema would be 2 good reasons.
Unfortunately we left the nervous innervation of the lungs for another time, because of the detail and time required and so that we may better link this innervation to other nerve system teaching. Have a read of this in your preferred anatomy textbook if you’re interested at this stage.