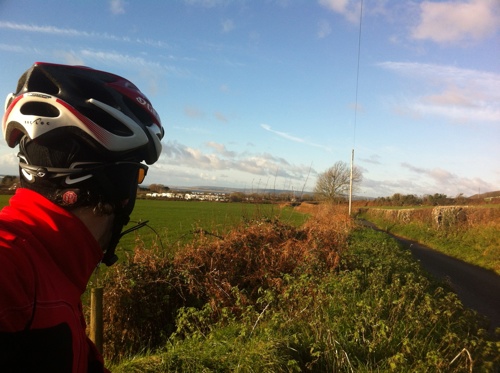 There’s a lot of comment kicking around about our mild autumn and winter. I’m not sure if people are complaining, wishing there was snow for Christmas, or just doing the British thing of commenting on all aspects of the weather. I’m very happy with the mild weather. It went cold last week which brought out the big gloves for the bike but in the week before Christmas it’s back to mild and damp, and I can live with that.
I did 4 hours on the bike today with the last 2 hours on the flat back into a 20mph headwind (I knew it was going to be there but it was still a suffertime) with a short bricked run afterwards. The legs are doing pretty well especially as this ride was a little early in the week to avoid Christmas Day, and a couple of tubes of GlucoTabs was all they needed to get home. Now I’m talking about the weather. Cyclists and runners are probably worse than most for this.
I’m midway through my second block of training and I can see and feel my fitness slowly developing. I can also feel the fatigue building, and this week got tough as I squeezed in a bunch of sessions without the usual easy days to get them done before Christmas Day. Christmas Day and Boxing Day will be easy days before the third week in this block. Load and recover, load and recover.

The world is less wobby now. I was diagnosed with BPPV by many people, including the second year students as they had just had a week on the ear. That’s benign paroxysmal positional vertigo to you. Clinicans love abbreviations.
I missed a couple of sessions because I couldn’t move my head or walk unaided, but later the next day life was a bit better as long as I avoided certain head positions (looking up or down) and quick head movements. Working on a laptop was mostly ok, as you keep your head naturally still. Training in the following week got done, and the only real trouble was in the gym. I found that looking down at the deadlift bar and then lifting a heavy lift made me really dizzy, as did looking up at the pull up bar and then pulling. Once I’d sussed that out I stopped looking up or down and set my hands in place by feel.
I’ve just completed another week of training after that, and I’ve done a little tumble turning in the pool and a tiny amount of backstroke and that was ok. I can also lie on my back again to stretch, and that’s really helpful. Moving me head quickly still gives me a weird sensation, so doing things like maneuvering the car into a parking spot has to be done steadily as you flip your head to look back and forward rapidly.
At this time of year missing a little training isn’t a huge problem, and I didn’t miss much. I just hope it doesn’t recur again sometime important. 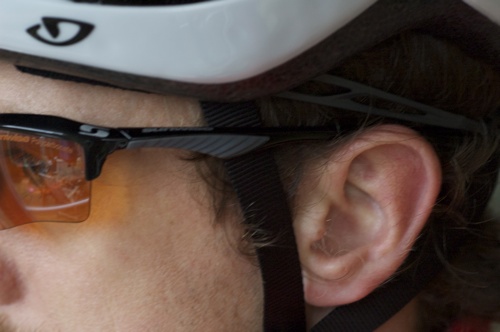 The world was a bit wobbly once it had started spinning last week, but it wasn’t too bad. I had to skip a lifting and a swim session, but I was able to make up the missed running session (working hard to complete my goal of 3 runs a week until Christmas without hurting myself as it has been going very well) and, most importantly, make the all day swim clinic with TheTriLife on Sunday.
I was a bit apprehensive about getting in the water because if I put my head in the wrong position the spinning comes back. That would be no fun in 2 metres of water in a 50m pool. It was all a bit wobbly getting in but after a few lengths I felt ok. No tumble turns or backstroke allowed. It was a great day too. I learnt a lot about my stroke and about the ‘ideal’ stroke, and with the video footage I can better visualise what I’m doing and what I want to do. Great stuff. Gonnagetfaster!
I’m very glad that this isn’t an infection or (hopefully) anything nasty. I know that people with vestibulitis suffer much worse with pain, constant vertigo and nausea. Full on vertigo is horrible and completely debilitating. It’s hard to move your head, to look up or down, let alone walk. Try eating a plate of food when you get nauseous looking down. Tricky!
Sitting at a computer screen working is ok, and my head is nice and still. Chatting to people is difficult, and I’m learning to minimise my movements and probably to limit my body language which might be a bit weird. Nodding and shaking my head is not nice at times. Sleep is interrupted because the room starts spinning when I change sides, waking me up. Cycling is pretty good, the balance is there, and your head is nice and straight and still. Running can feel a little wooly, but it’s ok. Swimming is still a bit of a worry, and I’ll wait until all the symptoms have subsided before I tumble turn again. This week is an easy week, so I’m not doing so much anyway. 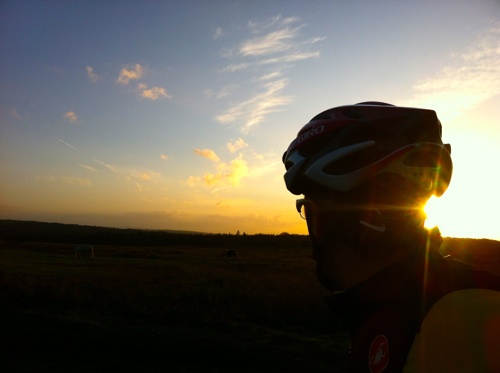 I woke up yesterday morning and the room was spinning. Fast. Although not an entirely new experience for me I’d only experienced this before after drinking quite a lot of alcohol, and when going to bed, not waking up. Oh dear.
The spinning subsided a little after swapping sides, but I wasn’t about to get up and out on my bike early. A slow start to the day, a little wobbly work on the laptop, and I started to feel a little better. I thought I’d try out the bike, and once I got going I didn’t feel too bad. I felt pretty good in fact. I was a bit sore from yesterday’s long ride, and it was a chilly morning, but the wind had died down and from the Crofty salt marsh flats I could see flocks of starlings coming together and growing into huge swarms of birds swaying over the Loughor estuary and Pembrey. I also saw a grey heron and (I think) a little egret or maybe a great white egret. I did some force reps on the hill and rode home, feeling fine.
The rest of the day was ok. A bit wobbly, and bending over was a no-no. I got ready for a run later in the day and lay on the floor to stretch out those gluteal muscles that had been causing discomfort on the bike. The spinning came back, hard. I did the stretches, stood up, and sat down again. The world was very, very wobbly, and I was getting seasick in my living room. No run today then. Oh great, I’ve got an all day swim camp on Sunday too.
The rest of the evening was pretty unpleasant, but it all eased up enough to let me go to sleep. I slept in this morning as the world was all a bit Mr Soft when I first woke up. I scrubbed the gym and the swim from today’s training, and rearranged work plans to take a sick day. I don’t fancy getting in the pool feeling like this.
I sorted out the cleats on my winter cycling boots as it’s now December and has been very chilly for a couple of days. Testing these out on the bike felt ok. Not so wobbly. Off the bike the world was swaying again. Maybe cycling is good for the vestibular system in this case. Your head stays nice and level and mostly forward.
I hope this doesn’t last too long. I’ve built up a nice training load over the last 3 weeks though and have a fair bit of fatigue to shift (especially as I did this week’s long ride on Wednesday) so next week is an easy week anyway. It’s just starting a little early. If I keep a level head (ha!) I should be able to cycle, and maybe run. It’s the swimming that may be troublesome.