Seven days after “retweaking” my right calf and resting it with just a couple of 10 minute runs in the week, it feels great. It feels strong, fresh and new. Going on previous experience with this problem I think I’ll rest it until the Gower Duathlon on Saturday though, to give it time to strengthen. The left calf should be getting stronger and healthier too.
I might try a bit of skipping barefoot after cycling today. That might help the muscles involved and other parts of my feet too.

All this fitness will be for naught if I can’t run 10km at the end of the race.

I’ve been struggling with tight calves and pain for most of the year, and every time I rest & recover the problem soon returns. I have managed a run of over 2 hours, and I did start speed work, but the recurrent pain has given inconsistent run training. This year my focus has been on the bike, so extra hours on the bike compensate largely for lost running time, and it seems to be doing a good job of maintaining run fitness, but not of improving top end pace. I often struggle with calf tightness like most runners, but this is different.

He-who-looks-after-my-legs and I have been struggling to work out what’s going on. The pain, tightness & lumps have been in the medial heads of the gastrocnemius muscles of both calves, with the left typically worse than the right. The tightness when running starts in the middle of the calf though, halfway between the popliteal region and the heel bone, and then extends medially. I probably increased the volume and frequency of runs a little quicker than I should have this year, but felt that my legs were capable of this at the time after a winter of healthy cross country running. I had previously tweaked my left medial gastrocnemius at a cross country aquathlon race in October, that he-who-looks-after-my-legs determined was unlikely to have been a tear. I had also broken the fifth metatarsal bone of my left foot almost a year ago, with the concomitant atrophy of the muscles of the left foot & calf with wearing a plaster for 6 weeks. Most significantly though, I spent much of the winter working on my running economy after reviewing photos from 2010 races that showed me reverting to a heel strike when tired. By changing my running biomechanics from a minor heel strike (I used to be a major heel striker but changed this a number of years ago after recurrent tibialis posterior muscle pain and twisting my ankle badly) to a more mid-foot landing under my centre of gravity it’s likely that I’ve changed the way I load the muscles of my feet, ankles and knees. Possibly the eccentric loading of my knees has shifted to my ankles. Data from the track suggests I have indeed improved my economy, but it feels like the flexor hallucis longus & (possibly) flexor digitorum longus muscles are unable to cope with their new jobs and fatigue early in the run. it seems that followers of the Pose Method of running (I do not) also often suffer from calf soreness (http://www.posetech.com/training/archives/000503.html) after moving from a heel strike to a balls of your feet landing.

The flexor hallucis longus (FHL) muscle gives flexion of the big toe when contracted, but it is important in the push-off phase of walking & running. The muscle arises from the posterior surface of the tibia and its tendon runs medially around the ankle to the big toe. The flexor digitorum longus (FDL) muscle gives flexion of the other toes, and also arises from the posterior tibia and runs around the ankle. This muscle is important in stabilising the foot when walking. These guys match the initial tightness and pain I get when running, & fit with the main potential cause. It was he-who-looks-after-my-legs that worked all this out, not me. It’s great to have someone that works so hard to fix me up & keep me going, and that understands my motivations.

With sports massage, stretching (FHL & FDL were indeed very tight), rest, huge reductions in running frequency & volume and some care the calf lumps & tightness goes away. Unfortunately there is a cycle of rest and “reinjury” so a plan is needed. This involves avoiding running unless I can jump without pain, have no (or almost no) calf tightness, and limiting the running to short durations in which I can be sure tightness of the calf will not spread or become painful. If pain begins I have to walk home (so I don’t want to run too far)! I aim to slowly increase the duration of the run by 5 minutes if no significant tightness occurs and to run no more than 3 times a week. If I tweak the muscles again, like I did playing football with Jack this weekend, I have to start all over again. This is likely to be a slow, painful process.

The other question is how else to improve the strength, endurance and fatigue resistance of these muscles? Is running enough or do I need to do something else? He-who-looks-after-my-legs has vetoed calf raises, and I already do heel drops to look after the condition of my Achilles tendons. Maybe barefoot skipping will help?

This is all tough mentally. I want to keep running, I want to keep pushing my fitness, and I want to be race ready next month. Realistically I need to fix the problem and keep looking at my very-long-term goals. By remembering that I have bigger goals than just this season’s races it helps me take my foot off the gas, as it were, to allow my calf muscles to get healthy again, and then get them fit slowly and methodically. If I don’t finish some races this year then so be it.

I’m taking a step back to take two steps forward. Or maybe a running jump. 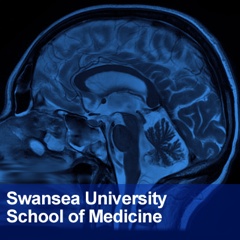 The 6th podcast from Phil & me (sorry, Dr Phil Newton & Dr Samuel Webster) is up, live, available and downloadable. We talk about how sensations of pain are relayed to the brain and a little about how the brain perceives pain, phantom limb pain and referred pain. Phil also tells me how the brain is able to modulate pain, why we rub a shin after banging it on the coffee table, and how opiates and other analgesics work. Kind of. (He doesn’t really know, but nobody else does either).
Get it from the iTunes feed, or download the MP3:
Neuroscience 6 – Pain pathways 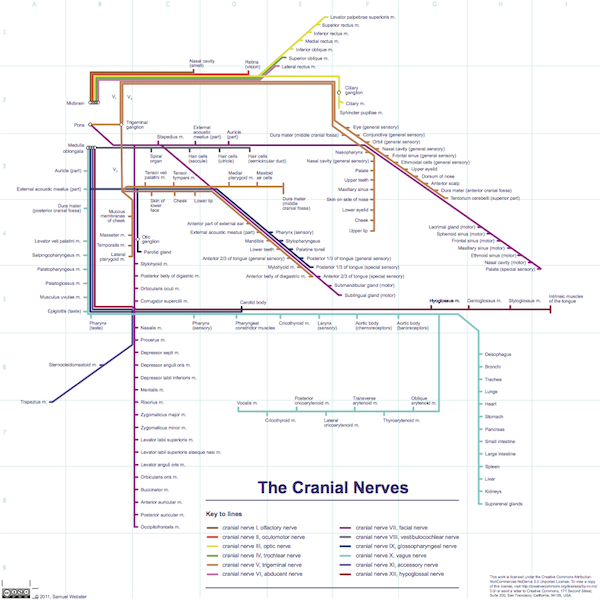 What do you think of this? I’ve been putting this together, probably, for the last couple of years.
I was driven by the aim to visually represent, in a format that most of us recognise and can navigate easily, what the cranial nerves link to. That is, which structures send and receive information via neurones of the cranial nerves? Which cranial nerves supply what structures in those regards? I’ve seen this information represented in a number of ways, but never like this. I’m hoping that this will be a single resource to answer questions about cranial nerves. You could call it up on your computer, phone or tablet, look at the poster printed in the lab, or keep a paper copy in your pocket or bag.
There’s a lot more information that could be added, but hopefully the reader will be clear on what type of neurone is involved by the type of structure to a certain extent (no motor fibres run to the teeth, for example), but I haven’t highlighted parasympathetic neurones or all the ganglia. I have tried to group structures together, but I haven’t tried to recreate individual nerves entirely. If you stare at the thing long enough you may start to see a nose, a tongue and who knows what else?
There is room for future revised editions here, but I had to stop at some point and put the thing out for use and review.
If you care to, let me know what you think.
Download the full size pdf here (254Kb).