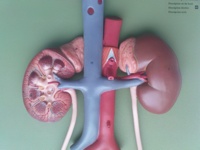 I wasn’t supposed to be teaching on Monday but one of our clinical colleagues was ill so it was a good job I could remember a little bit of kidney anatomy.
I briefly introduced the location of the kidneys, found retroperitoneally on the posterior abdominal wall. The right kidney is a little lower than the left, and they have different structures anterior to each (on the left and right sides of the abdomen, that is). I must remember to answer my own twitter question about this. We noted the aorta and the inferior vena cava and and the connections to & from the kidneys (renal arteries & veins).
Looking at the models and prosected material we noted that the left renal vein lies between the aorta and the superior mesenteric artery, and that this artery arises from the aorta just superior to this point. It is worth reviewing those three anterior branches from the abdominal aorta to link this renal anatomy with your GI tract learning. We also noted on one prosection that there were two right renal arteries and two left renal arteries in this particular case. Interesting!
We also took a look at the interior structure of the kidney, relating the cortex and the medulla to the histology and function of the kidney. In the cortex we would expect to see the glomerulus, the proximal convoluted and distal convoluted tubules, and in the medullary pyramids we should find the loops of Henle and the collecting ducts. The cortex is highly vascular, whereas the medulla is primarily composed of components of the urine collection system. Urine, we supposed, must collect at the apex of each medullary pyramid, and here we found spaces called minor calyces. Although we were looking at sections of the kidney we tried to imagine the roughly pyramidal shapes of the medullary segments, and that these pyramids were also arranged off the plane of section that we happened to be looking at (coronal). The models of the kidneys helped with this.
The minor calyces joined up and drained into larger spaces called major calyces, and these in turn drained into the renal pelvis from which the ureter began. Remember this separation of “blood” parts and “urine” parts of the kidney when you look at the embryological development of this organ.
Links:
Wikipedia has a labelled diagram of the internal parts of the kidney: link.
A study in 1986 by Gattone et al. attempted to trace the innervation of the kidney: link.
The National Kidney Foundation (USA) has lots of patient-friendly kidney info: link. 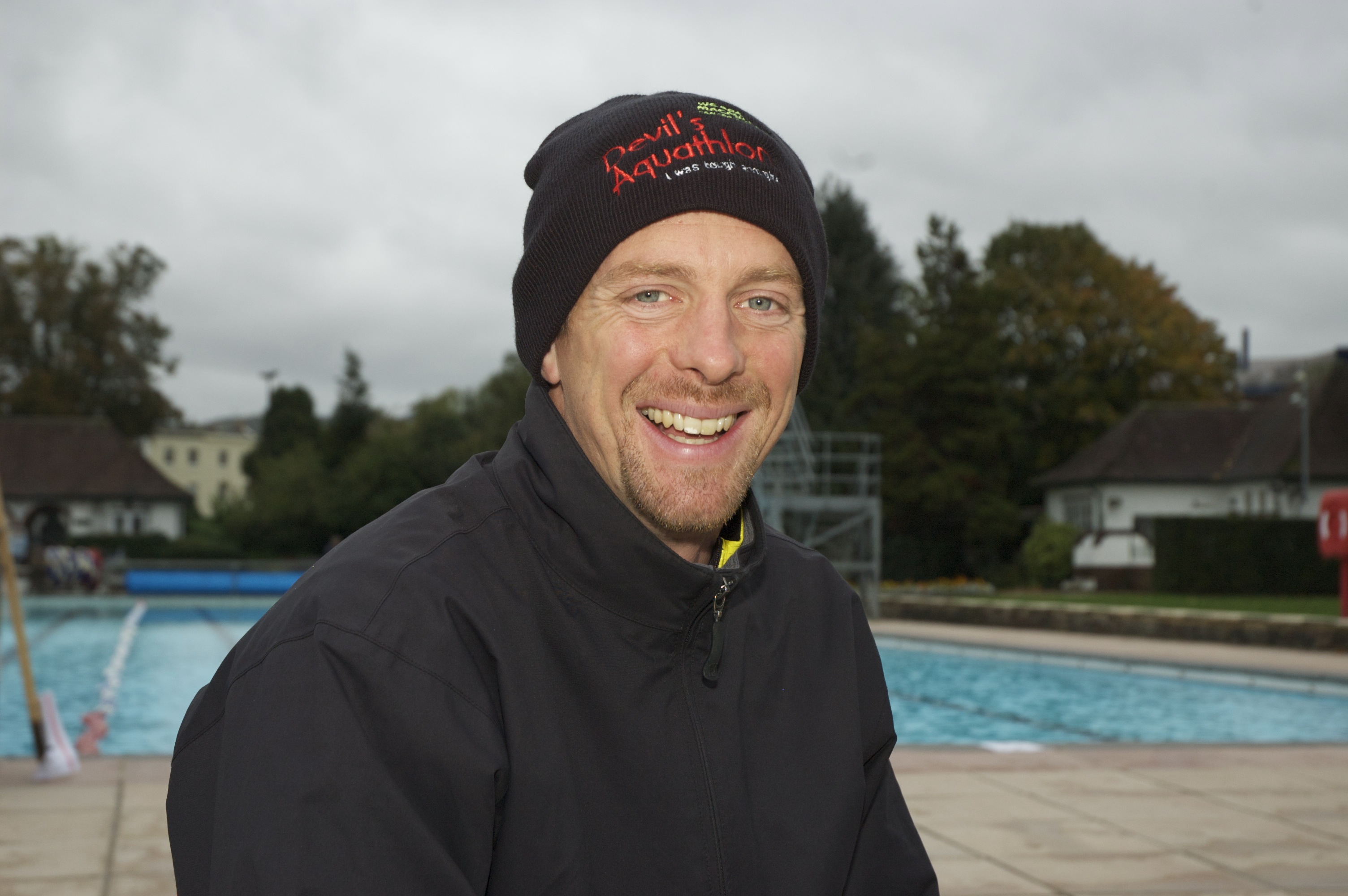 I raced in the inaugural Devil’s Aquathlon last weekend in the Lido at Sandford Parks, Cheltenham and up Leckhampton Hill. It was a 2km outdoor pool swim, wetsuits allowed, followed by a mostly cross country 10km run with a nice steep 200mish hill to climb. The aim was to run to the Devil’s Chimney, an infamous local stack, and back to the pool.

It was a slightly wet, cool, grey morning and the pool was nice & cool but not cold. The heating had been switched off the week before. You could see the ridge of the hill that we needed to run along from the pool, but it was slightly hidden by low cloud.

Anyhoo – pool, paced swim, sticking to 1:35/100m effort for the first 500m with bilateral breathing and upping the pace as appropriate later in the swim. Pacing was good, but maybe a tad overexcited as I really wanted to get out of the water within 4-5minutes of the proper swimmers. The effort level went up all on its own as the number of lengths increased (it’s bloody hard this swimming lark!) & I got out at the same moment as a bloke in the neighbouring lane. Kim called out that we were 2nd & 3rd in this wave with just 3:45 to the leader. “Yeah, I’m having that”, I thought.

29:20 swim. Awesome. Smashed my target. Ok, so I cheated by wearing a wetsuit in a 50m pool but I’m still chuffed.

It’s pretty horrible trying to stand up & run after swimming 2km but I dropped my shadow through transition. Neoprene off, cross country shoes on, & grab the marker with my number on to drop at the top of the hill & the turnaround point. Simple.

The first part of the run was unpleasant but as I got to the off road section it got nice & slippery & steeper & steeper. The rain was nice. Towards the top of the climb I tweaked my left calf on some of the steeper steps. It was painful but I was guessing it was more of a cramp than anything else from the long swim and cold puddles on the run.

I was catching my man by the top of the hill but he slipped on the flat section at the top & hurt himself badly enough to be unable to continue. I called to him & indicated that I’d find the marshals & let them know of his plight. It was windy up top & I imagine you’d get pretty chilly sat in a puddle wearing Lycra.

So out in front I found my way through the various paths to the chimney, startling a photographer & lobbing my coin on top of the bucket (symbolising the chimney). There weren’t a lot of arrows on the course & I wasn’t sure whether we were supposed to follow the main path or make up our own optimal route. I chose the former option just in case.

The descent was ace fun, with sweat in your eyes, darkness under the trees, water, mud, stones, branches and roots. I thought I got down well and fast, but ask me again this time next year & I’ll probably tell you how slow I was. On the tarmac and back in my native environment I hammered it down, through the park and was chuffed to recognise the buildings near the finish. I crossed the line & crashed into Kim, waiting for me on the other side of the finish line. 1:17.

I was first back in my wave but Phil Parsons in the third wave ran a hell of a lot faster than me and pushed me into second place. Good running! There was no prize for 2nd, nor for the vets. We all got a really nice hat for finishing that will definitely find it’s way into my race bag.

Lots of fun, great run course, very happy with my swim but I hobbled around the finish area with my tweaked calf. My sports therapist has treated it with ultrasound, poking, & localised NSAIDs with some hot/cold therapy from me but I was prohibited from running for a week. A week! I screwed up my preparation for the Cardiff half-marathon but it’s no biggy as my race season finished at Bala and I’m just playing now. I may still break 1:20…

Next year? Yeah, I’m hoping they’ll run it again next year. With a few more arrows on the course.