The results from Llandovery triathlon are in and they look nice for me. I had a fast swim, which I knew, but I also had the fastest bike split. That’s very nice as I don’t think I’m biking very well yet. My bike fitness has only just caught up with January levels.

I gave up all my advantage on the run with a very slow (>19mins!) 5km run split. That makes sense of course, as I’d only just started running again that week, 4 weeks after having the plaster cast cut off my left leg. It will take a while to regain that run fitness and speed. It’ll be fun though! I wonder if getting off the bike and hammering a 17min run will be doable?

Results aside it was a fun afternoon. It was great to hammer the bike & it’s the first time it has been used in anger. My swimming has really improved as I’ve not been allowed to run so have spent much more time in the pool. Getting my feet on my shoes out of T1 is going to need a bit of thinking about and a lot more practice, and I’ve now worked out how to get my Garmin to pick up my heart rate when I get out of the pool. I’m sure I’ve got a much better idea of pacing a sprint distance triathlon too.

All of this points to one thing: I’m going to get faster. This is from last weekend (which, for some lovely reason, feels like an age ago) from Langland Bay. I swam with Thom and Holly early on a Saturday morning.

Incidentally, this is the route we swam: Day 268: I won a trophy today, originally uploaded by samwebster.

Hmm, not much of a race report for this one, from the Llandovery sprint triathlon.

Swam fast (fastest ever), got on my bike (ooh, tricky), cycled fast (no idea how fast yet, but caught lots of slower fish), got off the bike (also tricky), put slippery, heavily vaselined shoes on and ran hard (ow, fully stitched, tough to breathe) then ran harder (probably got some proper speed up eventually) and crossed the finish line ready to puke.

Surprisingly I was 3rd overall but shhh, don’t tell anyone – I’m not supposed to be running yet. Very nice. Lots of fun & I learnt a lot. 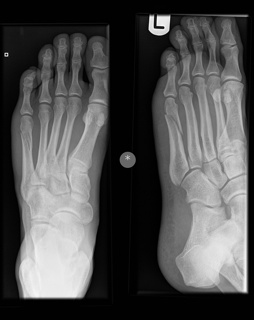 I wondered if I would become more careful after breaking my foot. It’s true that I’ve generally become more careful as I’ve become older (we learn from our mistakes?) but would the break or the time in plaster or the foolishness of it all drive me to wrap myself in bubblewrap in many aspects of my life?
Cornering on the bike hasn’t been like it was when I was 18 for a long time. Putting holes in clothes from rubbing them against tarmac and then having to pay for new or ride in holey stuff has slowed me down there, no doubt. After riding through an icy winter it takes a while to regain the trust of friction between tarmac and rubber too. If I was road racing or hanging on in a criterium it would be a different matter, but training and the TT nature of triathlon doesn’t reward the risk of fast, tight, hang-it-all-out cornering in quite the same way.
Running and walking I’m very careful of kerbs, but I always tended to watch where I was putting my feet anyway. I’ve also been very mindful of kids’ toys around the house. Some of the harder, pointer ones would do nasty things to my left foot, so it’s a bit of a minefield in the bedrooms. I often use a minesweeper action to clear a path through Jack’s room.
But coming down the stairs slows me down. I don’t bounce or run down stairs in the same way at all, as you might expect. When I approach the bottom of the staircase I take particular care. If I’m absently scratching my nose my brain picks up that I’m running out of stairs, it clears its process list and focuses all my attention on that bottom step.
Careful now.

76 days after breaking my foot I went for my first run by the sea, in the sun, around Swansea Bay. It felt good to be running again, but it ain’t easy. I’ve been building up to this slowly with walking and walk – jog – walk intervals. The foot has been feeling fine and strong, and my sports therapist has been working on my ankle to get the range of movement back. I’ve been very careful.
The pace was OK, and actually looks similar to the pace and heart rate that I was running at an easy effort with before I broke my foot. And that was back when the bay was covered in ice and snow. Remember? That was back in January. I’ve jumped from running in the snow to running in a vest. Mean no time for blogging!