Isn’t that the opposite of what your mother always said? A study published in Nature Neuroscience found that playing action video games improved contrast sensitivity. Players were able to better discern very small changes in shades of grey as a result of playing games “where they had to be constantly ready to react to unpredictable events, and where visual information had to be responded to instantly in very precise physical ways.
Reacting and targeting seem to be important and the groups compared played either Unreal Tournament 2004 and Call of Duty 2 or The Sims. The changes to vision were long lasting, and this type of game may also help both eyes work better together.
I love this. Violent video games are good for you.
Links:
BBC article
NHS Choices article
Nature Neuroscience abstract. (Subscription required for full article).

I finished my low mileage transition month with my last run today. I was worried that I was getting a little too comfortable with these easy weeks, given that some of my training weeks have been as tough as hell and for some reason I’ve scheduled worse ones in the near future. Also, when you smash a target that you thought was really tough sometimes your motivation dips (bizarrely), as you feel like you don’t need to do it again. Do you really need to break that PB? I recognise this behaviour in myself, and try to change it by reviewing my short, medium and long-term goals and toughening them up. I like to aim for the impossible. If it’s merely challenging I needn’t work so hard, but if it’s nearly impossible I have to give it my best. If I’ve worked as hard as I can and I still fail, that’s OK. The goal remains and I can try again. I will be cutting my target times significantly.
I really want to run tomorrow but it’s not in the schedule. That’s a good sign.

I’ve said it before, but is there anything better than new shoes? Annabel got her first pair of proper walking shoes (and I got new running shoes).

When your mileage goes up you really start getting through shoes. I need to buy another couple of pairs too. 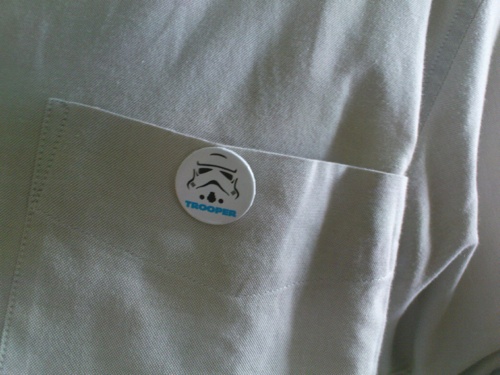 Jack bought me a badge for my birthday. Watch out for it in meetings.

BBC News report that a fireman dressed up as Spiderman to coax an eight-year-old boy from a third-floor window ledge.
Not only is that in itself awesome, but the fireman keeps the costume in his locker.
Read the article – bbc.co.uk.

The boys have won the third embryology lecture quiz in a row, Jo Bishop tells me. That’s a fantastic run, but will the girls deal the killer blow in the next one? There are two lectures & two quizzes to go.

The boys won the quiz at the end of the embryology of the endocrine system lecture, and by quite a large margin. The score is now 5:2 to the girls, with (I think) 3 to play.

Hey! I hadn’t taught for a while so it was good to start again, in hopefully a helpfully interactive way as we all looked at sliced and whole kidneys.
In the session we talked about the cortex and the medulla, pointing out that while the cortex is outermost it also surrounds medullary (or renal) pyramids so there are renal columns (cortex) between pyramids through which blood vessels pass. We tried to relate the functional histology of the kidney that you saw in Paul Griffiths’ session to the gross anatomy that we had in the lab. We talked about the glomerulus, the proximal convoluted and distal convoluted tubules in the cortex and mentioned the loops of Henle and the collecting ducts in the medullary pyramids. Urine, we supposed, must collect at the apex of each medullary pyramid, and here we found spaces called minor calyces.
The minor calyces join up and drain into larger spaces called major calyces, and these in turn drain into the renal pelvis from which the ureter begins. Remember this separation of “blood” parts and “urine” parts of the kidney when you look at the embryological development of this organ.
We talked about autonomic innervation and the routes that sympathetic nerves might take to get to the kidneys (sympathetic trunk, splanchnic nerves, prevertebral ganglia). While sympathetic innervation will cause vasoconstriction here, so reducing urine output we reminded ourselves that most of kidney function is controlled hormonally.
The blood supply to the kidneys is clear, but we paid attention to the level at which the renal arteries pass to the kidneys (remember the superior mesenteric artery here) and looked at the relationship between the renal arteries and veins (the left renal vein lies anterior to the aorta). We made sure that we could differentiate between a ureter and a blood vessel at the hilum of a kidney specimen.
More information:
Wikipedia has a labelled diagram of the internal parts of the kidney: link.
A study in 1986 by Gattone et al. attempted to trace the innervation of the kidney: link.
The National Kidney Foundation (USA) has lots of patient-friendly kidney info: link.

This was a screenshot of my Mac’s desktop last week. The desktop’s wallpaper’s numbers are my half-marathon goal (time & distance). I found it useful to remind myself of what I was aiming for when getting into a fatigued, JFT mode whenever I cleared my display. I smashed that number (and I thought I was setting my sights high!) and I might put a new one up there next month. What number this time? 1:20?
Yes, you can see all sorts of crap living on my deskytop too. How voyeuristic.

Jess Griffiths, our Learning Technologist pointed out an interesting publication suggesting that students do better using podcasts than learning from lectures. It’s an unexpected result from my position as both a lecturer and a podcaster and very interesting.
The researchers set a lecture for a group of students purely for testing this, with half of the students getting the lecture and the other half getting the podcast plus printed handouts. I’d argue that the podcast was merely a recording of the lecture alongside pictures of the slides rather than a standalone podcast. “Students who downloaded the podcast averaged a C (71 out of 100) on the test – substantially better than those who attended the lecture, who on average mustered only a D (62).
“But that difference vanished among students who watched the podcast but did not take notes.Students who listened to the podcast one or more times and took notes had an average score of 77.”
Can I skip giving my lecture this afternoon then, please? I recorded it last year already. I guess we’d all miss out on the post-lecture quiz though, which the boys again really need to win this afternoon.
Read more about this study on the New Scientist website.