I seem to be getting up my own arse with this blog. I’ll stick to one liners and photos. Oops – that’s 2 lines.
Feel free to comment on how much of a twat I am.

I’m sat at home, nursing my ankle. So I’ve added a video to Jack’s website, of him playing with his mum and his duck. 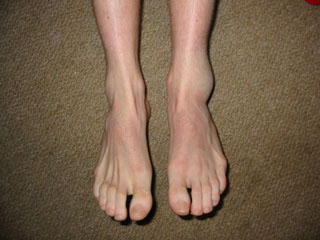 I was having an excellent run. I’ve been doing too much work, so had been looking forward to stretching my legs, and the air was good: clean and fresh. Running downhill through Radyr woods I passed a loose section. The path cleared and I guess I must have been looking forward instead of down, because a powerful, deadening pain tried to signal my brain that my ankle had turned over. I’m still moving and land on my right foot. Lots of momentum. My left foot plants and the pain goes up a notch to overload: nausea and weakness. Right foot again, and my body’s not going to let my left foot land and I’m flying, downhill. Landing on my left side and rollng to a stop like a premiership footballer the nausea sinks into my stomach. I lie still for a few minutes, muddy and grazed.
Eventually, I haul my sorry arse off the floor and weight the ankle. As usual, with a few steps it gets easier, and I limp and hobble my way home, embarrased. I am pretty depressed.

They say that most fathers work even harder after the birth of their first child. I’d agree with that. We’ve lost a salary, and outgoings have gone up so I have to earn more money. Luckily (if I can generate the business) I can do this at home in the evenings writing websites for people, so I still get to see Jack and Kim.
The flip side of this is that probably for the first time in my life I am starting to get sick of computers. I’m sure it’s only temporary 🙁

The Pembroke Tri results are out on www.the-multisport.org. I’m 254th, finishing in 2 hours 36 mins 7 secs. It looks as though all the Cardiff triathletes who know what they’re doing are ahead of me, but of the “novices” I seem to be the fastest. Happy with that!
I guess for Bala I’ll be aiming to get home in under 2 and a half hours. I’ll try and do a bit more cycling, and some intervals running. That might help. I could do with working on my endurance, but I don’t have the time, which is a bit of a requirement really, isn’t it?

I have finally ordered my iBook at work! Woohoo! It’ll take a couple of weeks to get to me though.

“Our bodies are forged in the fire of our will.”
Enter the Dragon. 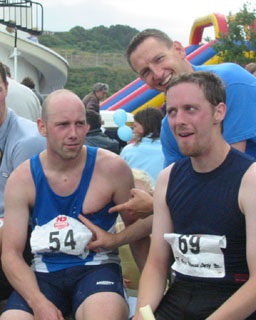 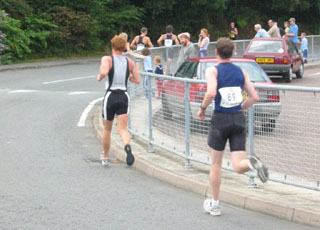