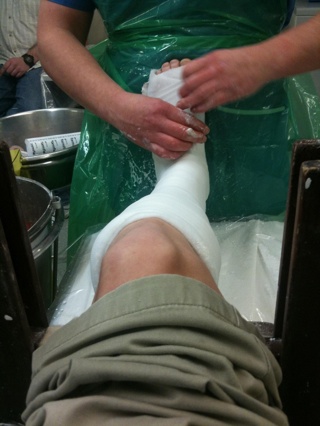 Oh dear. I broke my foot this morning. I foolishly left too much crap in the hall downstairs, and when I ran downstairs to answer the door I was looking at the stuff instead of where I was placing my feet. I missed the bottom step, landed heavily and inverted my left foot. I couldn’t walk it off and a rather nice haematoma had appeared by the time I took my sock off a little later, so I spent the afternoon in A&E/X-ray/fracture clinic. I have a spiral fracture of the shaft of my 5th metatarsal.
I’ve got plaster on for the weekend & will get reassessed on Monday. I’ll probably get a walking cast put on then.
Bugger. I guess I’ll level all my World of Warcraft characters to level 80 then.