Anatomy of the infratemporal fossa (continued) 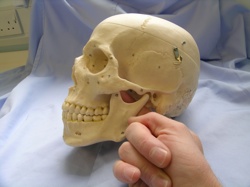 OK, where were we? By looking at the medial and lateral pterygoid muscles we found ourselves in the infratemporal fossa.
This space is bounded superiorly by the sphenoid bone (and the temporal bone), laterally by the ramus of the mandible, medially by the lateral plate of the pterygoid process and anteriorly by the maxilla. You can reach this place on a skull by sticking your finger down through the zygomatic arch and deep to the mandible, or from posterior to the ramus of the mandible. By doing this you also see the routes by which structures may enter or leave the infratemporal fossa.
What’s so special about this region? It has some important structures running through it, and by knowing where the infratemporal fossa is you will also know where these structures run. As you find out more about the sphenoid bone and the nerves and vessels that pass through it you will become aware that they all pass from or to the infratemporal fossa. It’ll give you a chance to link parts of the head together in your own mind. 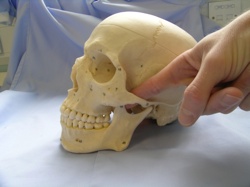 The common carotid artery ascends in the neck and splits into internal and external carotid arteries. The internal carotid artery disappears inside the skull and the external carotid artery continues to ascend posterior to the mandible. It terminally bifurcates as the maxillary artery and the superficial temporal artery. The maxillary artery dives through the infratemporal fossa, its branches extending to parts of the face (e.g. the mandible, teeth, the cheek, the scalp) and supplying blood to those muscles of mastication that we also looked at. Importantly, it also gives off a branch called the middle meningeal artery that passes superiorly through a small foramen (spinosum) in the sphenoid bone. This artery is important in supplying blood to the dura mater (connective tissue surrounding the central nervous system), and very important when considering blows to the side of the head, such as encountered in boxing.
So now you can locate the maxillary artery as it runs from the external carotid artery through the infratemporal fossa, and if you pick up a skull and take a look at this region hopefully you will be able to imagine its course in three dimensions. 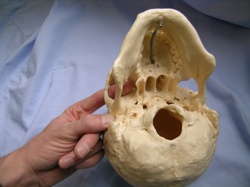 In this same region the blood is drained through a plexus of veins known as the pterygoid venous plexus (or simply, pterygoid plexus). We’re starting to see that the term pterygoid is associated with the infratemporal region, because of those pterygoid processes (Arnold’s glossary says, “pterygoid: adjective, Greek pteryx = wing, and eidos = shape; hence, wing-shaped”). This plexus of veins surrounds the structures here, draining blood from the cavernous sinus inside the cranium, and linking to the facial vein, a more superficial structure. There’s an important anatomical link here between superficial and intracranial venous structures, and this has an interesting clinical relevance. There are no valves in the veins here, so infection may pass from superficial or oral structures back to the cavernous sinus, causing serious problems.
So there are two important blood vessels in this region. What about nerves? If we talk about cranial nerves in general, we have 3 cranial nerves involved in the infratemporal fossa. Hopefully you’ll remember that the facial nerve (CN VII) passes through the parotid salivary gland (but doesn’t innervate it) and branches to supply the muscles of facial expression. The parotid gland lies over the region that we’ve been looking at, so the facial nerve must pass very near to the infratemporal fossa. In fact, the facial nerve drops out of the skull from the stylomastoid foramen, a little posterior to the infratemporal fossa.
However, parasympathetic fibres from the facial nerve making their way down to the sublingual and submandibular glands do pass through the infratemporal fossa. The chorda tympani, a nerve carrying those fibres, passes through the middle ear and leaves the skull via the petrotympanic fissure, a fissure in the temporal bone a little anterior to the stylomastoid foramen. The chorda tympani passes through the infratemporal fossa to join with the lingual nerve, and passes inferiorly to the lower salivary glands.
Aha – the lingual nerve. Do you remember what that’s a branch of? Our next cranial nerve is the trigeminal nerve (CN V). The lingual nerve is a sensory branch from the mandibular nerve (also known as V3), the third branch of the trigeminal nerve. The mandibular nerve leaves the cranium through the foramen ovale (see here, and here), passing into the infratemporal fossa. All its branches pass through the infratemporal fossa, including those motor branches passing to the muscles of mastication that we looked at earlier (making the infratemporal fossa a great landmark for finding and remembering where all these nerves are).

Ok, the final cranial nerve. If the facial nerve passes through the parotid gland but doesn’t supply secretomotor fibres to tell it to squeeze juice, what parasympathetic fibres do? The glossopharyngeal nerve (CN IX) sends fibres on a fascinating route through the skull (described here, but best looked at with a skull or a model, and multiple sources to work it all out) that eventually makes it to the infratemporal fossa. Here, right next to the mandibular nerve shortly after it appears from the oval foramen, these glossopharyngeal fibres synapse at the otic ganglion. There are a few ganglia in the head that you should know about, and this is one of them. Postganglionic parasympathetic fibres then pass from the otic ganglion as part of the auriculotemporal nerve to the parotid gland, and it’s these fibres that tell the parotid gland to secrete saliva.
So just by finding one region in the skull you can now locate 2 major vascular structures, important parts of 3 cranial nerves, and you’ve started to learn about the bones and foramina of the skull itself. It’s a good region to spend time looking at.

3 thoughts on “Anatomy of the infratemporal fossa (continued)”

Getting lots of socially distanced outdoors. Our o

Haven't been here for a while.

I got a thing in the post. Huh. I wonder what it c

Back on the boulder.