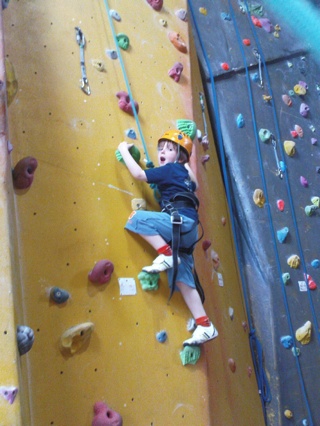 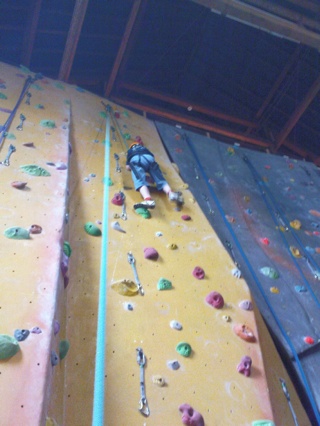 I took Jack climbing yesterday to Dynamic Rock. We were there for 4 hours and even then he didn’t want to go home! He’s never spent so much time doing anything, except maybe a marathon Star Wars Lego on the Wii stint.
It’s a nice climbing wall, and is pretty quiet at this time of year because most people will be climbing outdoors. The walls are OK, and plenty high enough for a 5-year-old. The staff are very helpful and friendly, and there’s a nice atmosphere. Jack really liked the bouldering room and spent time alternating between the roped climbs and bouldering. He was moving really nicely through some problems I was giving him (mostly asking him to find a way to reach a particular hold).
Jack got a bit scared as he got higher up the roped routes, and was consistently giving up around the second bolt. It wasn’t too difficult, just too high. When I finally insisted that we needed to go home and that this would be the last climb he tested the rope, kept going up and up, and with a couple of requested pulls from me at the other end he got all the way to the top!
When we got home he asked if we could go climbing. All morning today he keeps asking, “can we go climbing now then?” I think he’s hooked.