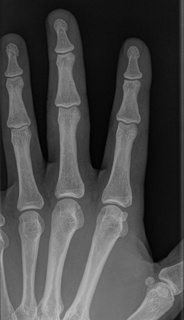 On Monday we got to the end of the upper limb and looked at the forearm, wrist and hand. We will be going back up to the shoulder and the brachial plexus in particular after Christmas.
In my station we looked at the bones of the wrist and hand. Easy enough, and stuff the medical student must know. The hand is incredibly important to everyday life, and injuries occur from sharp instruments (but hopefully not in dissection labs) and falls. The bones are subject to injuries from falls and crushing.
You can review the bones of the hand in this elearning thing I made with the help of some very talented students from the Swansea Metropolitan University here: bones of the hand. 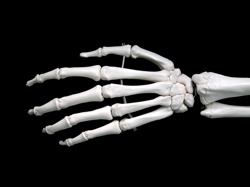 Looking at the carpal bones you can see 2 rows of 4 bones each. The proximal row has the scaphoid bone on the thumb side, which is commonly fractured by using the hands to break a fall. We worked across the lunate, triquetral and pisiform bones to the little finger side of the wrist. Beware that the pea-like pisiform bone appears to be fused with the triquetral bone on all the plastic models, so take a look at the real bones in the lab and notice how these bones are separate and how beautifully they fit together.
The first bone of the distal row on the little finger side is the hamate. This bone stands out and should be easily recognised by its hook on the palmar side of the hand. All these protuberances and tuberosities (like the hook of the hamate) are helping form the carpal tunnel, through which the flexor tendons (and median nerve) pass to reach the fingers. Muscles tend to attach to tuberosities, so bear this in mind when looking at the bones and at the intrinsic muscles of the hypothenar eminence and the thenar eminence. The plastic bone models coloured in blue and red are good for this.
Moving back towards the thumb we find the capitate, trapezoid and trapezium bones. I failed to mention that you can remember the location of the trapezium bone by remembering that the trapezium is at the base of the thumb. Notice also the shape of the trapezoid bone on a model of the carpal bones. It has a distinctive wide, flat base dorsally and a narrower flat top ventrally.
The carpal bones can slide over one another to give the movements of the wrist that we are familiar with. The metacarpal bones for digits 2 to 5 are tied together by connective tissues, but the metacarpal bone of the thumb is free, allowing a greater range of movement, including opposition. The articular joint between the trapezium and the metacarpal bone of the thumb allows rotation as well as flexion, extension, abduction and adduction. Remind yourself of the movements of the thumb, and that the thumb lies on a plane at right angles to the plane of the fingers (look at the directions that your nails face to emphasis this).
Each digit has 3 phalanges (proximal, middle and distal) except for the thumb that has only two. The metacarpophalangeal joints are shaped to allow flexion, extension, abduction and adduction of the fingers. The interphalangeal joints allow only flexion and extension, as hinge joints.
Very simple, very clear anatomy, but the type of anatomy that is almost guaranteed to turn up in exams from time to time. These should be very easy marks.
Links:
The movements of the hand (by me!) 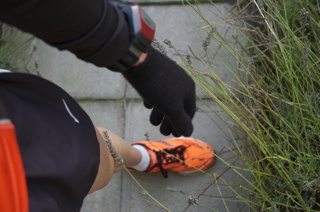 I’d entered as it was a nearby race of the right distance, but balked a little at the entry cost. Boys & girls from the club would be running & watching though, & I never get to see enough of those guys so I thought that was worth the entry fee. I had an inkling that the course might be quite nice too & would be a good post-season test for my run fitness. I thought it would be fun to have another run with James Nunn after our close finish (7 seconds I think) in the Tewkesbury half-marathon.

I got there nice & early with the family to avoid any potential traffic issues with possibly 15,000 people turning up to run & we had a nice walk down to the start in the bay in the cold, sunny morning. The kids had quite enjoyed the drive across from Swansea, watching the sun come up. Kitted up, warm up, pee, gel & found Nunney outside the barriers near the front of the race. After some pre-race boisterousness we clambered over together & jostled into position near the front of the queuing runners. We needn’t have hurried as the starter’s preamble took a while & we went past the 9am start time. I was looking out for a colleague, Anne-Marie, but was surprised I couldn’t see her (she’s taller than me). It turns out she had nipped into the elite’s starting space ahead of us, which is fair enough as she finished 3rd here last year!

Eventually the hooter hooted & we charged off. One of my aims was to work on my first mile race pacing & I was aiming for a steady 6:10min/mile pace with the thought that I might actually run a 6min/mile. Adrenaline is a funny thing. Another aim was to run straight 6’s (i.e. 13.1miles at 6min/mile pace to finish in 1:18:30ish) so this all fitted together nicely. It turned out to be a 5:50minute first mile, but the effort level felt good and easy so I decided to stick with it. Subsequent miles also hit 5:50 so I was doing ok. I had lost sight of James & it turned out to be a good thing that I hadn’t planned to run on his shoulder as he belted out a first mile so fast that he put himself in the first 15, Kenyans and all. (He spent the rest of the race working his way backwards but still beat me easily with a great time & effort by him).

The usual bunches formed & mildly pee’d me off so I found some space to run alone. There was no wind, lots of sun and the temperature was perfect. The route through the city & the park was pretty nice & as I have cycled most of it an awful lot (it used to be part of a commute route) I was aware of the slight inclines and potentially slower miles, so helping my pacing.

There were lots of shouts from faces I hadn’t seen in a while too. Lovely. I felt quite popular.

By mile 7 it was getting hard. Missed training from a mildly torn calf the other week was starting to show itself, and no amount of mental trickery would get my pace back up to 5:50min/mi consistently. Hold on for 7 through 10 then run the 5k hard to the end. Really, the only slow mile I had was when I took a feed station a little slow for a gel & a good few swigs and that was a smidgeon over 6min/mi pace, but the seconds were adding up. Anne-Marie had found me, overtaken me, and left me standing. She got a lot of S4C time too. I’ve no idea what they were saying though as I couldn’t find the subtitles button.

Into the bay and there was more than the suggestion of a breeze in our faces as we headed east towards and over the barrage. A short, steep, fast decline & incline had lit warning lights for my failing right hip flexors & abductors. A focus on good running form was pretending they were fine but with that plus breeze my miles were creeping above 6min/mile. Oh well. The maths suggested I had done enough for a 1:17 overall time that would be a PB of some minutes and respect and would have me jumping for joy if I could jump at the end. I focussed on chasing down lone runners and picked them off painfully, one by one.

The buildings of the bay were a welcome sight but the view of the huge loop up the wide road and back was not. I passed the finish as the 3rd lady was finishing, I think the announcer said, but I still had some way to run up to the turnaround point. Once around and facing the finishing straight I had a profound mental change of perceived effort and pushed hard enough to drop the Les Croupier runner beside me. It was a potential lesson in central governor running fatigue theory, and I thought I’d already overcome that.

1:16? Seriously? I was very chuffed with that time for a half marathon. Of course, it turned out that we’d not quite run a half marathon as some doofus had rearranged the course to avoid an obstacle to reduce it’s length by 193m. That must have been some obstacle.

I wasn’t disappointed. My racing season ended in September and I was just mucking around for the love of running. The maths say I would have run a 1:17 so I’m v impressed with my spindly legs. They’ll go even faster next year. But maybe not at the Cardiff nearly-half-marathon 2011.

We spent the rest of the day seeing club-mates, mooching round shops and recovering from the heart attack induced by the cost of parking in Cardiff city centre. Immediately after the race my nose & head felt awful, like someone had rammed ice cubes into my sinuses. I guess that’s a side effect of breathing in huge volumes of very cold air for over an hour. My legs felt ok (relatively) and recovered very quickly in following days, but the rest of me felt terrible. It may have been a rather stressful race as I was ill for the following week. Maybe I’m a little out of shape and overdone. Time for a rest.