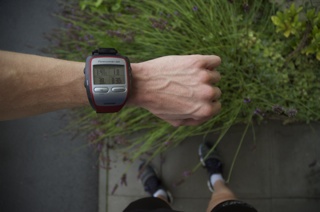 After finishing the last high intensity training block & feeling dizzy tired I’ve been on an easy week of training for the last 5 days. A little running, a little pootling on the fixie, a little splashing in the pool. After just a couple of days I was feeling good. I’m keen to race again & have been entering running races through October, November & December. I might regret that when the keenness wears off but it’s always good to get muddy in the winter and races get you outside. Next year I’ll try to race in August, but this year avoiding racing in August has also meant avoiding racing in the rain.
We’re off to Pembrokeshire for a week away tomorrow (only booked on Monday). Maybe I’ll chill out a bit and not think about work for a bit. Maybe the kids will love it and be beautifully behaved. I’m taking my bike so my peak(ish) week of training will be running on the Pembrokeshire coastal path, which I know quite well in the parts that we’re going to, and cycling on new roads near the sea. The weather forecast is looking much better, as it often does when the kids are due to return to school. I’ll be doing all my swim training in the sea with the jellyfish. They always used to get really big jellyfish around there.
When we get back the new students will have arrived, settled in, and I’ll be teaching again. That week will be an easy week of training with some taper intervals leading up to my last triathlon of the year at Bala. I’m very interested to see what I can do after some well organised training and a taper.
I’ve got a ton of work to get done before I can go. I’ll pack tomorrow. 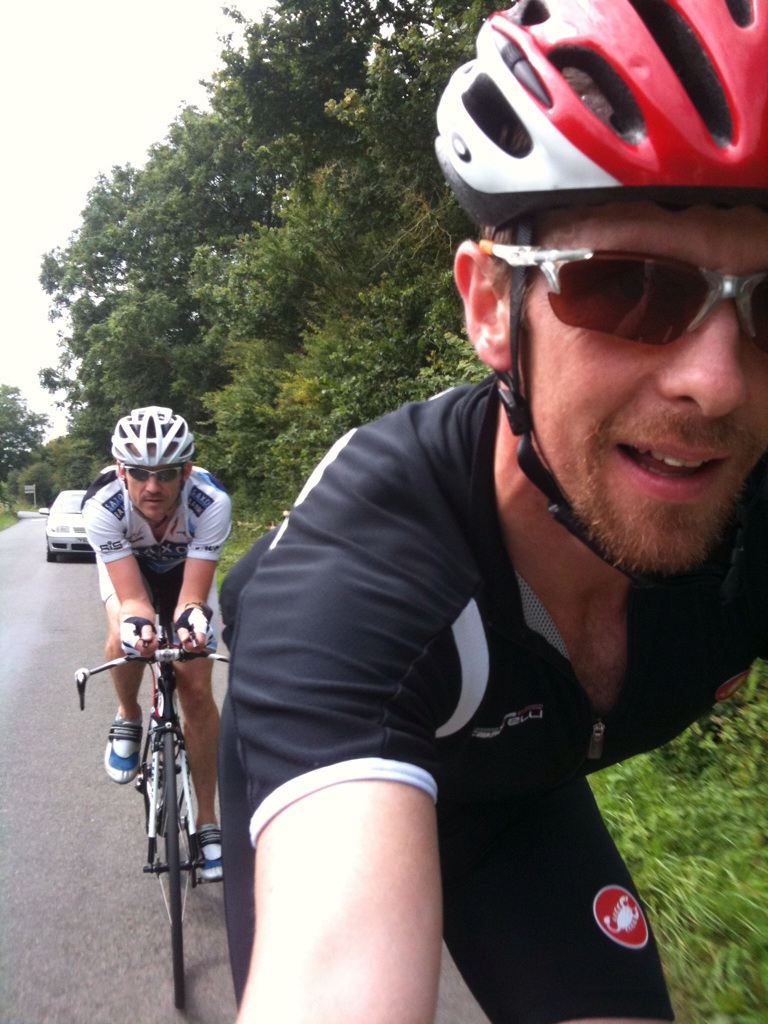 My training finally shifted away from largely easy, aerobic base training to more intense race-like training recently. I broke my foot, was in plaster for 6 weeks and had to go back to aerobic training to rebuild my endurance and general fitness. This is my first year of triathlon racing (I’ve completed 2 triathlons in the past – in 1996 and 2003 I think) and my second year back into an endurance sport so I have a lot of basic training to get through to develop my fitness and skills for each sport.
My mileage and hourage (no, I don’t think that’s a word) has dropped but my sufferage and knackerage (them neither) have gone up. Woah, high intensity stuff is tough! From run training last year I know that anaerobic intervals on the track can have a profound effect on my running, but also that they wipe me out & I can’t do them often. So, joy of joys, with triathlon I get to do intervals 3 times a week, once for each sport, plus tempo pace stuff.
Each session is met with a little trepidation, rather like a 2 hour run. Once started, I hammer it. Being able to hammer it to the end is something else though, and something that has noticeably improved over the last 6 weeks. Speed, lap times, time spent at high heart rates and at high speeds have also measurably improved. Running 800s at 5min/mi pace really helps with technique and efficiency. Steady runs after these feel different, more on the balls of your feet and more forward. Not that I’m getting much steady running in at the moment.
This week I’m barely running 35km but that’s a session of 800s, a hilly run and a 30min run at 10k pace straight off a 20km tempo bike. No wonder I feel so tired. The fatigue from these workouts is quite different from the fatigue of high volume training.
I seem to be prepared for it though. Everything’s holding up under the strain and I have an easy week next week to recover and test some elements of my fitness. Hopefully this will kick my race results up a notch for Bala, Dale and the Cardiff half marathon. Day 373: Golf has too many rules, originally uploaded by samwebster.

I was complaining about the number of rules in golf in a 365 Flickr photo last week and then this happens in the USPGA: 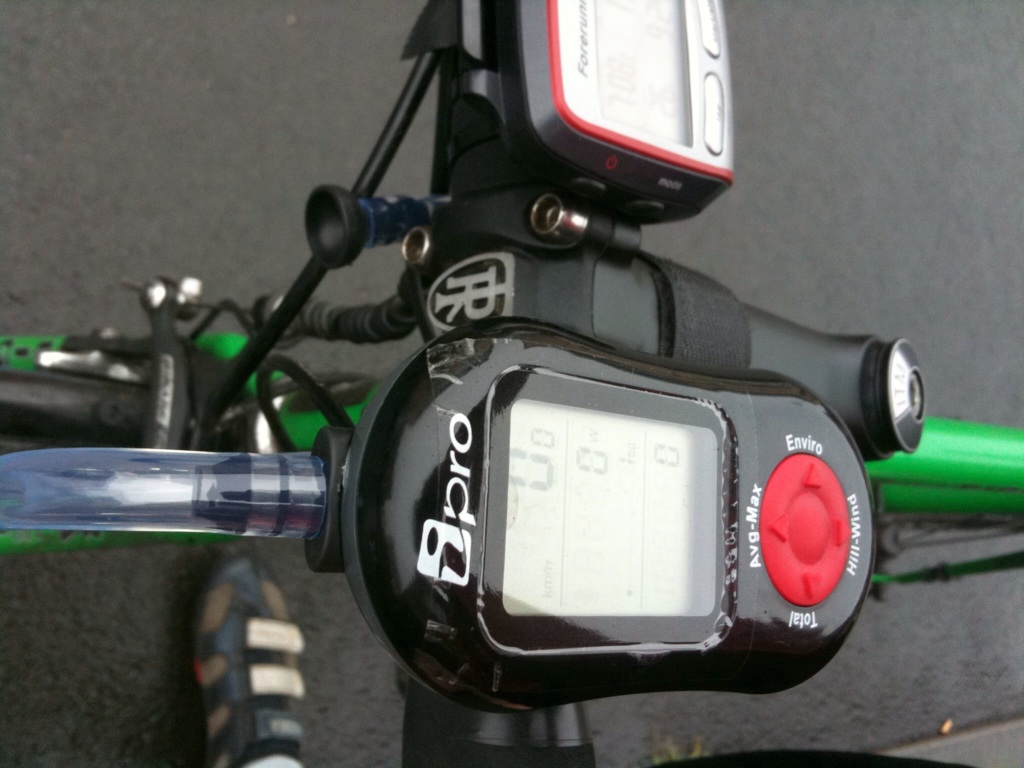 Triathlon uses a lot of kit, and triathlon training uses even more. So some of it fails, but when it all fails at once it’s frustrating & time consuming to sort out, repair or replace.
I got my iBike power meter back from Velocomp in the USA, replaced under warranty after failing in the rain. It cost me to send it back across the Atlantic but it’s working better than ever & has been happily out in the rain a few times. I really missed training with power and all the other data this magical little devices measures, displays & records.
Crud did a great job of replacing the smashed part of my roadracer mudguards for the cost of the postage. Send them a few stamps with your address & they post back the bits you need. Great idea! The new part looks like it has had a little redesign so they’re still working on these things, which is also great. Easy to fit, and they fit in very slim gaps.
Sci-con also did a great job of admitting there has been a problem with some of the roller bags and sorting me out. My saddlebag fell off on a ride and was never seen again. I’m glad neither my phone or wallet were in it! They misunderstood and just sent me the plastic bit that attaches to the saddle (I still had that bit) but then sent me a complete new saddle bag and roller mounting when I pointed out the problem. From Italy! Nice. I had two of the bags so now I have three roller mounts. Maybe I should stick them on some of my other bikes. I only lost a tube, tyre levers and some patches. After this I’ll definitely buy another diddy saddlebag for my race bike from Sci-Con. The roller mount doesn’t fit the TT bike because the saddle is waaaay forward.
The strap on my Garmin 305 failed but instead of faffing about with getting a replacement from Garmin and potentially being without my main heart rate monitor and training computer for some time I just bought the quick release kit as it has a lovely big Velcro strap and comes with a nice clip-in bike mount so I don’t have to use pipe lagging round my handlebars. Less than Â£15 from Amazon.
I splashed out and bought some more Castelli cycling shorts. Cycling shorts can be expensive but damned important if you’re riding a lot. A pair of Adidas shorts I have leave smiley shaped sores on my butt if I cycle in the rain with them. I’ve stopped using nappy cream on Annabel & save it for myself. I never have enough training kit and really should buy some more running shoes, cycling shoes, socks, shorts, waterproof bits, jerseys, etc, etc, etc. Good stuff tends to survive the miles though.
Nothing major, but stuff that slows me down. I need to change the sealed bearing units in a front wheel and clean up some rust on the forks of my training bike (yes, its steel!) and some other typical maintenance stuff but that’s ok. A lot of that work gets done in the winter as long as it doesn’t fail before. I’ve also had to faff with other life hassles that really shouldn’t exist like chasing Littlewoods for furniture they’ve charged me for but never delivered and chasing Apple for an iTunes card that they didn’t authorise when they sold it. I hate jumping through hoops to solve problems other people cause. I love it when people accept responsibility and solve your problems like SciCon, Crud and Velocomp did. Hopefully training-wise I should be ok for a couple of weeks. I do need to find a wetsuit that fits though…

I got a couple of Flip video cameras, so thought I’d test them out by cycling home & filming it. They’re nice and simple, and work well!