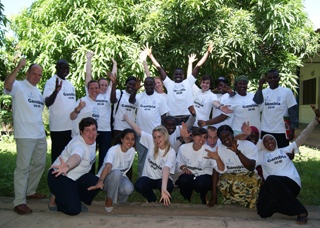 A group of students are out in the Gambia looking at health in the context of international development. If you want to find out more and keep up with what they’re doing, take a look at their blog:
swanseagambialinkproject2010.blogspot.com 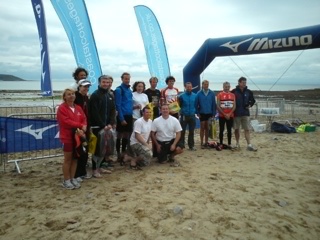 So this has been a challenging weekend so far. I’m not sure what the lesson is but it’s in there.
I invited a mate and his family to come and stay with us and to enter today’s Gower Triathlon. Garry and I used to bike race together when we were half our current ages and now we have somehow both drifted towards triathlon. I thought it might be a good battle as I guessed my swim would be better than his, his bike leg would be faster than mine and who knows what would happen then in the run?
I took him round the bike course yesterday and we had a swim in Port Eynon while the families played on the beach (we did too a little!) The weather ended up being a lot better than expected and I seemed to collect most of the sun on my head. Normally I have a cap with me, but I thought it was going to be rainy, not sunny. Later in the evening a stonking headache began, and when I looked in the mirror I realised that the cause was a red face, rather than a resurgence of the mild fever I had earlier in the week. I’d fried my brain.
Trying to get an early night and a good sleep before the 5am start paracetamol dulled the pain but I got little sleep and was up all night peeing. But not drinking anything. That can’t be good. At 5am I felt no better but drove to the race with Garry and a wet flannel on my head drinking as much as I could keep in my stomach to try and rehydrate. I didn’t think I’d start the race.
Registered, kit together, transition sorted, wetsuit half on and it was clear I was going to at least get in the water. Maybe the cold water would help. My wetsuit fits poorly and the cold water flowing down my neck probably alleviated my symptoms. What the hell, race on.
It was great to bump in to some of the club guys on the beach & I found one of my students (Alistair) – a good swimmer. I’d like to hold his feet in the swim. The race eventually started & I just hammered the swim, got some draft, was pretty straight to the buoys & came out right next to Alistair. Excellent. Good swim.
I’ve been poor at running to transition but ran faster today up the beach, feeling ok. Hammering the bike up the hill out of Port Eynon I picked up most of the places ahead of me, another before the climb, another on the climb and then belted the rest of the bike course on my own. Lots of rain to keep my poor head cool and a course I knew really well. Lovely. I took the descent back down to the beach a lot faster than I’d expected too so I must have been having fun. Another good effort.
Off the bike, out onto the beach for the run and I was clear behind and ahead. I had a big gap to pick up so I pushed hard for the first lap through soft sand, shallow dunes, huge muddy puddles and boardwalks. At the turn to lap 2 it was clear I wasn’t catching and no-one was catching me so I kept up a decent effort but took safer lines after nearly turning my ankle on a couple of hidden holes. Finish safe. I knew I was in 3rd or 4th place.
There was a good crowd at the finish and a nice finishing chute so I enjoyed that. As I was recovering Garry finished, way too close to me for comfort. Fit boy! Shortly after him Cardiff Tri jerseys started appearing, plus more students and friends. Great!
Waiting around for the prize giving my headache and sore neck started to reform & I started to feel like crap again. I don’t understand how I was able to race at that intensity feeling that bad before and after. Maybe it was the cold water. I still don’t feel any better now, writing this.
Officially 4th, Richard Jones was kind enough to stand aside for me to be awarded 3rd (open category age group) on account of him being an awesome ex-international triathlete. Thanks, Rich. A nice bit of glory for me, my face in the paper and a nice prize.
And my name next to Richard Jones’ on the results sheet. Just don’t look at the time difference. 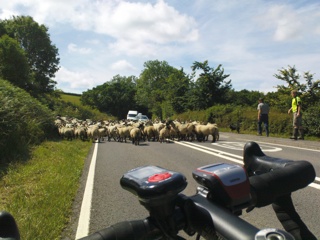 Just as I was getting used to the long, mostly easy riding, running and swimming my training has switched at last to more race-like speed work. Of course, I’ve been racing since April or May, so I’m a bit out of sync with my original and current training plans. I just finishing my winter training, for example. In July. The broken foot of February has rather confused my racing year, but hasn’t dampened it too much (6th at the Welsh Tri champs in Broad Haven at the end of my final block of winter training on tired, tired legs was a great indicator and great fun).
Funnily, after anaerobic intervals on the track and in the pool and some muscular endurance intervals on the bike last week my (shortened) long run on Saturday didn’t go as well as usual. I felt bloody awful. I cut the already short 1 hour 45 mins run down to about an hour and a half and plodded my way out and back by the Loughor estuary at around 8min/mi pace. Horrible. I barely managed 12 miles. Happily I don’t think it rained though.

I assumed it was a good sign of the new stresses of the speed work. After a good night’s sleep and a bit of a lie in to try and avoid the rain (failed) I also cut short my planned Sunday training to just 2ish hours on the bike and a 45 minute run off. I mucked about a bit trying to recalibrate my iBike power meter before it failed in a light shower, and it continued to rain for most of the ride. With a nice hill and a good wind my legs felt strangely good and strong. Getting off the bike I ran an easy 10km in 43:34 at around 7min/mi pace. Weird.
What a difference a day makes, eh?
Talking of which, my “Remote Wind Sensor” (rubber bung, some tubing and a wind catching flangey-thing) arrived for my iBike this morning. I’m hoping I can get it dried out, fitted and calibrated for tomorrow’s bike intervals. More rain is forecast and I’d love it if this kept the rain out of my iBike and gave me power data for the whole ride. Oh yeah, and my mudguards exploded on the bike too. The bit connected to the rear brake broke and the mudguard got pulled forward by the tyre. I found the bits, took it all apart and stuffed then into jersey pockets – I wasn’t far from home. I’ve no idea how the back bit snapped off though. They’re clever modular things, these Crud Catcher Roadracer mudguards, so I should be able to get the bit I need. I’ll get some Duck tape on it tonight as a temporary fix. 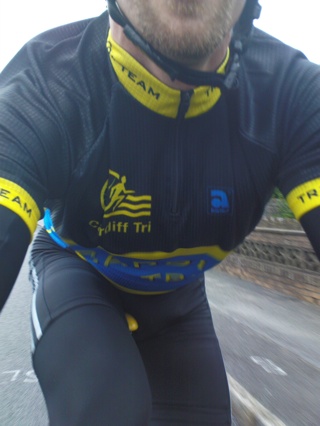 I’m racing at the Gower Sprint Triathlon this weekend with a good, old (?) friend so I’ve shunted a few workouts around this week and cut out the track intervals to balance training intensity and give myself a little recovery and avoid the dastardly dead legs of last Saturday. I’d better get back on the TT bike & see if I can remember how to go fast for 25km. I was just getting the feel for standard distance races too. There are a couple of short climbs though, so those will be a blast. I’ll be able to swim HARD too hopefully as its only 750m. As it’s exam week for the students this week I’m looking forward to thinking about something else. If I get the marking done in time I might be able to make a long weekend of it.

I’ve given a couple of lectures over the last couple of weeks on the first 18 days of development and the embryology of the cardiovascular system. If you’re a Swansea student looking for my blog notes go back to Blackboard and you’ll be able to download the whole lecture plus the other stuff I linked to.
If you’re a non-Swansea student go on to my Medicine page and grab the podcasts. They cover the same content as the lecture, more or less. More, probably.