“A teacher is never a giver of truth – he is a guide, a pointer to the truth that each student must find for himself. A good teacher is merely a catalyst.”
– Bruce Lee

That title sounded familiar, so I clicked on the link on the BBC News website.
“University students are being given iPods loaded with useful tutorials.
“The University of Derby has given 35 devices – costing Â£99 each – to radiography students, to provide them with “different ways to learn”. They contain pre-loaded video lessons about how to position patients for X-rays.”
I guess the new(s) part about that is that the University loaned the students the iPods.
BBC article.

The BBC are reporting on a Bristol University study suggesting that exercising employees are happy, productive employees.
“Two hundred people took part in the Bristol University experiment to test the impact of workplace keep fit facilities like gyms or classes.
“Exercise re-energised staff, improved their concentration and problem solving and made them feel calmer.”
It certainly makes me feel better if I’ve done a training session of whatever type some time during the day. It makes me organise my time better too, because if I’m disorganised I won’t be able to run, swim or bike that day.
“If people try to fit an active break into their working day, they might also experience the added bonus of their whole day feeling much more productive. And that always feels good in our busy lives.
“The study also begs the question whether employers can afford not to be encouraging active breaks.”
Encourage me, encourage me!
BBC article. 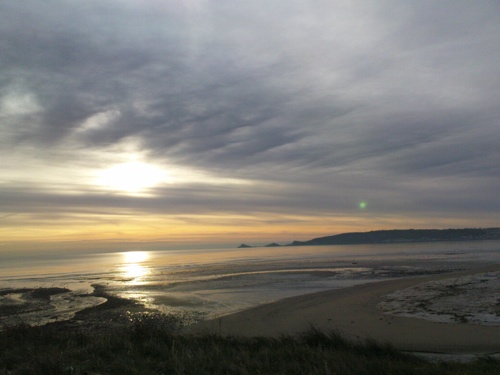 Views like this in the morning help with those frozen fingers. But I must get some new winter gloves…

Gasp! He’s writing about the exams! No, not really. I was just going to comment on how knackered Jo and I are after setting up, running and marking (yes, it’s marked already) an anatomy spotter exam. I really hate the marking – it’s tedious but instantly rewarding when someone does very well.
Anyway, one more exam tomorrow and the first years will be all done. Forget about the exams, forget about the results and enjoy Christmas. I’ll certainly be enjoying my main two week break of the year. (Especially if this bruised calf eases up and I can get out running again).
Merry Christmas!

I’m adding some links to the “muscles of the hip joint” entry below, so will stick them here too.
How Stuff Works: Why do humans walk on two legs? – an article exploring some of the thoughts of why we walk on two legs.
BBC Science & Nature: Mother of man – 3.2 million years ago – part of a series of human evolution articles, this one about the discovery of “Lucy” and the importance of “bipedalism” in differentiating between apes and man.
Running Planet: Leg blasting circuit – strengthen, tone and sculpt your leg muscles with this cross training workout. There’s some good anatomy in there too.

The BBC reports of warnings of “nut allergy ‘hysteria'”.
“Measures to protect children with nut allergies are becoming increasingly absurd and hysterical, say experts.
“A peanut on the floor of a US school bus recently led to evacuation and decontamination for fear it might have affected the 10-year-old passengers.”
Did that really happen? That’s crazy. Also, “the number of US schools declaring themselves to be entirely “nut free” – banning staples like peanut butter, homemade baked goods and any foods without detailed ingredient labels – was rising, despite clear evidence that such restrictions were unnecessary.
“School entrances have signs admonishing visitors to wash their hands before entry to avoid [nut] contamination.”
“He said these responses were extreme and had many of the hallmarks of mass psychogenic illness (MPI), previously known as epidemic hysteria.”
Read the BBC article.
Has this come about from education by the media and/or the internet? Or has a simple idea become mythical and monstrous within communities? It’s very strange.
Sorry about the title; I couldn’t resist it. 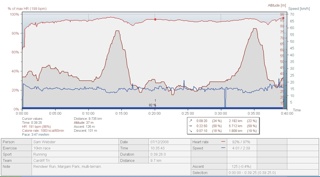 The first lap is slightly longer than the second, and I ran the second stronger than I thought. My watch measured about 300m short, which is normal. The faster I run, the more likely it is to underestimate my distance covered (and therefore speed also). Note how my heart rate was above 90% of maximum for about 37 minutes of the total 39:28. That’s racing! I ran the RNLI’s Reindeer Run 10k at Margam Park today. It was a beautiful morning; sunny but icy. Look at that time! I finished 6th with a new PB. I don’t think my second lap was as strong as I wanted it to be, but I’ll look at the data this afternoon.