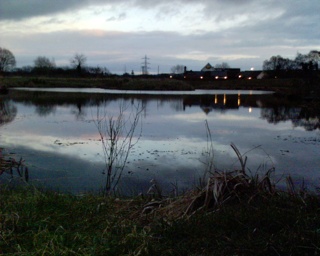 With the weather warming up (well, it will soon once this snow passes through) I went for a wander around a small coarse fishing lake, just around the corner from my house. It’s next to the road, so it’s not very quiet, it’s small, weedy and clear. There are some double-figure carp in there though apparently, and there’s a cafe serving all day breakfasts 🙂

People suck.
I had a short cycle on the road today, on my way home from work. Just 200m or so from the gates at work to the cycle path. Believe it or not, that was almost enough to get me knocked off my bike. Impressive, eh?
In that short distance on a dual carriageway with a 40mph speed limit only 4 cars overtook me, but 1 of them decided that as a cyclist I shouldn’t be there, I should be on the cycle path. Unfortunately he wasn’t psychic, otherwise he would have known that was my target, but on that stretch of road a steep bank of grass separates the road from the path. Instead he was moronic, and overtook me as close as he dared, even though he had all the room in the world, forcing me into the gutter and my arms into the air in an exasperated, “What the f&*k are you doing, dickhead?” He saw my display and pointed to his left, but I wasn’t sure if he was suggesting that I should be in the gutter or just pointing out the lovely sea view.
I know you guys think that you are far better drivers than the average Jo, and seriously believe that you could give Coulthard a run for his money, but that’s just not high quality driving. If a copper sees you he’s going to pull you over. Worse, if you do clip that cyclist (we’re often wobbly if the surface is poor) he’s going to end up in hospital with at least some broken bones and you’re going to end up in court shelling out a lot of cash with a very red face. What sort of argument is, “It’s not my fault, he should have been on the path”? A good driver will anticipate cyclists and adjust to overtake well in advance. We’re really not holding you up as much as you think we are – several seconds at most (count them next time). The road is usually faster and has a smoother surface, and don’t forget we pay road tax too.
Tolerance. A little bit does a lot for humanity.

What do you think about this scenario?
lostcamera.blogspot.com/2006/02/camera-unlost-but-not-quite-found.html
(A lady lost her camera in Hawaii, and was told that a Canadian family had found it. She spoke to them, but they will not return it to her because they don’t want to take it away from their son and they bought a charger for it. I recommend reading the full story.)
Personally I think it’s a crazy situation, and just goes to prove how even when people are doing something blatantly wrong they can still justify it to themselves. Nutty rating 4/5.

www.nicecupofteaandasitdown.com/theWife/biscuitcity/
Sorry, I’m struggling to sum up a comment to go with this link. Not even “how very British” feels right. Nuts rating: 4/5. 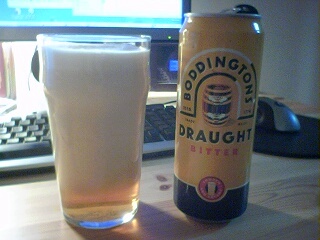 For Molly (if you’re reading this).

Warning, Lost spoilers below!
This is probably old news to most of you, but I’ve been getting into the TV series Lost recently. If you’ve watched it you’ll know that it’s not just a series about people stranded on a desert island, but that it’s about a bunch of people stranded on a very, very weird island. Therein lies the interest: the viewer is slowly fed tidbits to pique their interest and hold it (I often wonder if it isn’t all just a MacGuffin but I feel the writers have taken it too far for that). We really weren’t given much information in the first series other than some very strange and inexplicable hidden events, puzzles and drawn out mysteries (like why is there a sealed metal hatch on a remote, uninhabited (?) desert island). Given all that it’s very entertaining. The characters and their interrelationships are developed very well, and we usually feel that we’re just about to find out something important. It’s probably much more enjoyable to watch on DVD than it was weekly on TV, and you can expect some late nights.
Anyway. So I just had to watch the first few episodes of the 2nd series because the end of the first series was such a cliffhanger, as expected. I had some of those episodes on my home theatre PC so we sat down to watch. It crashed. No bother, I restarted it because it had been doing a bit of that recently. It restarted, we watched some more, it crashed again. Needless to say we got to the point where it crashed after a few minutes of video. My solution was to stream the video to another PC and watch it on the monitor, and we get through an episode. It appears that a computer that becomes damaged is a central part of the start of this series. Coincidentally the motherboard on my home theatre PC dies. Hmmm. I set up another PC to the TV to watch the next couple of episodes of Lost. The radiator in the water cooling system drips a drop of water onto the graphics card and that PC goes down. Oh crap. I seem to be jinxed here. If you know about the numbers in Lost, you might be able to imagine a source for that jinx. One of the character believes he is jinxed by the numbers (and most of the effects of that jinx seem to be wrought via electrical or metal objects BTW) and all sorts of bad things happen to him after using the numbers to win the lottery.
All of my computer woes happened during episodes where the all important computer on the island was discovered and became damaged. Once I pulled a bunch of parts together to construct one working PC myself to watch the rest of it on, I watched the characters fix their computer. Too freaky for words. Talk about getting involved in what you’re watching.
It couldn’t be the numbers, could it? Now, I’m willing to bet you that they started out as a MacGuffin, even though they may not end up as such!

This is a great study published in Hormones & Behaviour: when looking for a mate, women are more likely to go for deep, gravelly voiced men like Barry White. But we all new Barry White was the man, right? Deep, masculine, dominant voices have long been thought linked to high levels of testosterone, higher reproductive success and long-term health. What’s novel about this study is that it appears that for many women their preference for deeper voices was strongest during their fertile phase, which ties in with previous observations that many women prefer men with more masculine faces during the same period.
BBC article. 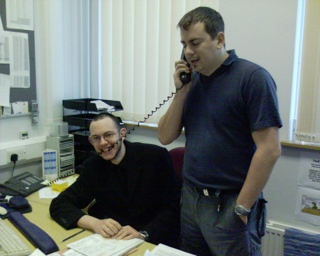 Time to get to the pub for lunch then. 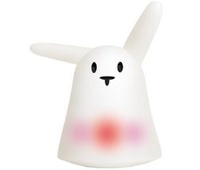 I’d be tempted if it wasn’t Â£65… This gizmo sits there, hooked into your WiFi network. He (she?) will do weird things like waggle his ears, flash different colours, talk to you or play you music. The really fun thing, however, is that your friends can send the rabbit SMS messages or emails and take control of the thing. Ace. Nabaztag will tell you the weather, tell you that your email has arrived, and earn his keep as a stock market ticker. Freaky little bugger.
Go and visit Nabaztag.

Mum and Dad popped down today, so we went to Three Cliffs Bay for a stroll (Jack getting very wet as usual, but doing lots of walking). More photos, but a boring grey sky today. 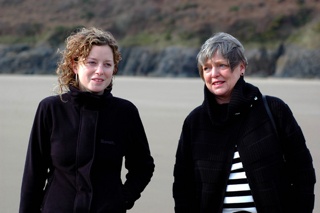 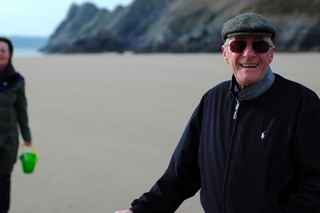 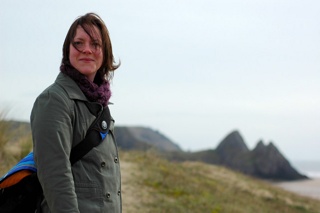 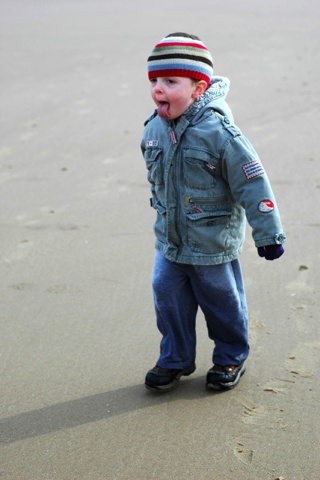