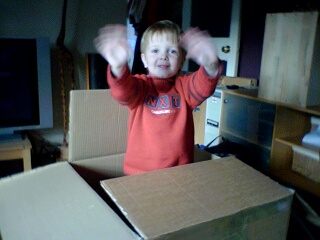 Wow – today might be the last time I commute to work by train. We’re supposed to move house on Friday, & for the rest of the week I’ll either be at home packing or driving between Cardiff & Swansea transporting things.
It feels a little strange to think about losing a defining part of my daily routine of the past 20 months. I won’t be sad to not have to take this train ride to get to work – my train was cancelled this morning. 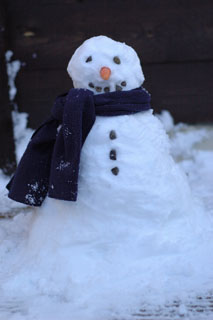 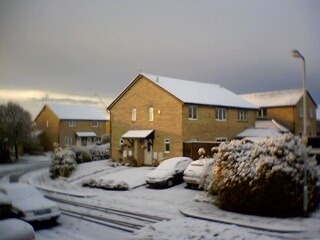 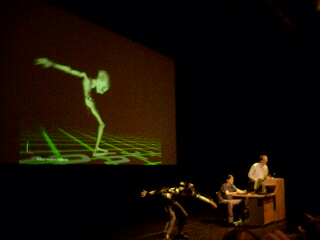 Real-time animation from motion capture. I want one! It would be great in the Anatomy Lab.

Wow – The University of Wales Swansea (my university) has just been voted top for student experience in the Times Higher Education Supplement. I think that’s 1st place out of 170 institutions. Blimey, those students just love it here.

Ha. At the science animation day yesterday the Taliesin auditorium had only a few dozen people for the later presentations. Today, a guy from EA Games is talking & I can barely get a seat. 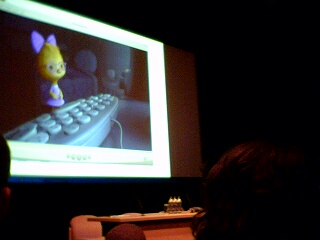 EA are moving toward the next generation of gaming by pulling in animators from Disney & ILM. Eamon Butler, a new EA recruit from Disney gave a presentation about animation methods, giving insights into the development of Disney’s next animation film, Chicken Little. 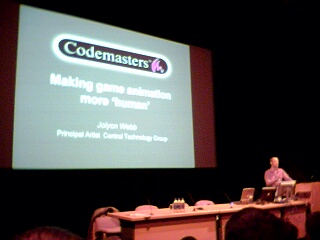 Codemasters are looking in a similar direction & hiring animators, so I guess their next project is to be a character driven first person shooter. They’re really focusing in on facial expressions & methods of animating them in real time, but they’re also applying these techniques to whole body animation. 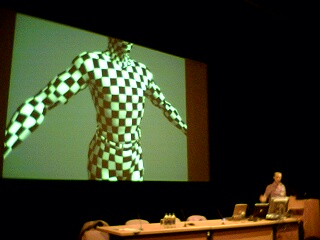 Havok are developing some amazing fracture physics. Meaning? Next-gen games will see truly destructible buildings, and more realistic destruction of large objects. This stuff looks ace. The demo they used showed a tank destroying the bases of skyscrapers, causing the buildings to come tumbling down, fractures spreading as corners & edges crash to the floor. Fun physics. 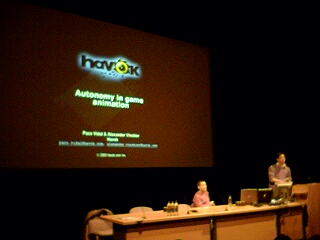 Unfortunately the Havok guys couldn’t get some of their videos in their presentation to work. So don’t feel bad if it happens to you. What they did show – characters fluidly walking up stairs, placing a hand on a bannister, eyes following objects or your camera – were very involving & impressive. 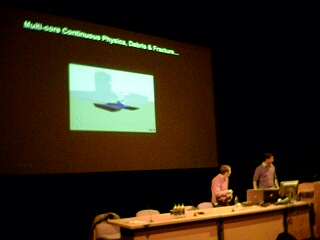 The character’s physical reactions to being hit by an object were also markedly improved on anything available today. Demos of this improved ragdoll physics had the audience giving the types of oohs & aahs associated with skateboard crash videos, especially when the character threw itself down some stairs and over walls, & picked itself up again. Its interactions with its virtual world & objects appeared very real & accurate. Very cool. 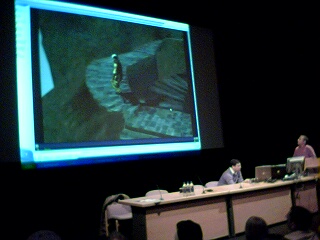 I propose that women of that mid-life age and beyond shouldn’t be allowed near computer-based machines until properly trained. It’s far quicker for them & everyone around them if they go and speak to a real person. Yes, really. We should put notices up or something.
As usual this morning I arrived at the train station with 10 minutes to spare, to buy a ticket & get to the platform. There was a huge queue for the manned ticket booths (mostly full of people just about to miss the 8.55 to London), so, as a 30-something educated white male nerd, I stepped into the very short queue for the automated ticket machine. Now, this is quite a good piece of kit. It is touchscreen operated, is nice & clear, gives shortcuts to entering common local routes (like Swansea) & takes plastic. OK, you have to be carefull to accurately press the screen, but each pressed button lights orange to confirm. Very straight forward.
So I stood, watching time slip away as two post-menopausal ladies stood poking & prodding the ticket machine to shrill cries in home counties accents of, “This is absolutely ridiciculous!”, & “I’ve been trying to get this to work for 25 minutes!”, etc. Lord only knows how long the poor lad in front of me had been stuck there for. I was just thinking of chainsaws & bloodbaths. Its a good job that you can’t get handy bag-sized petrol models.
So after telling us repeatedly, “It won’t work”, they sidled on to get their tickets from a real-live train-ticket sales person (of which there are many at Cardiff Central), trying to jump the queue & annoy even more people. Impressive. Cue more cries of “This is absolutely ridiciculous!” & “Ooh, my poor oestrogen”. OK, probably not that last one.
Could I have helped them? Yes, I could have helped them by saying, “Go and talk to that nice man over there in the local rail company’s uniform, I’ve got a train to catch”.
Needless to say, the lad in front of me & I bought our tickets in about 45 seconds each. I still had to run for my train, & I hate that. 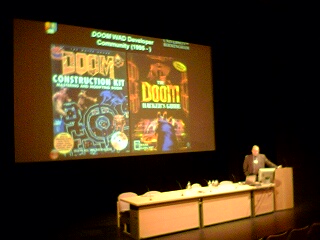 Hey, look how we can use Doom for some serious training applications! In fact these days the Farcry, Half-Life 2 & Unreal engines are used, with Farcry’s world modeller being the simplest to work with.
An important point noted was a warning for us to avoid at all costs a rerun of the Virtual Reality promises of the 80’s. We don’t need expensive (ï½£100,000s), cumbersome kit to acheive our aims. Just look at how some people play 1st person shooters, weaving their heads, ducking & peering around corners. They’re immersed in the game.
Another point was how the controllers for military kit have become rather similar to controllers of consoles like the Xbox & Playstation. Kids entering the armed forces are used to that style, I guess.
So how can I get to play Doom all day & call it work? Where does this fit into MB medical training? I’ll have to work on that. 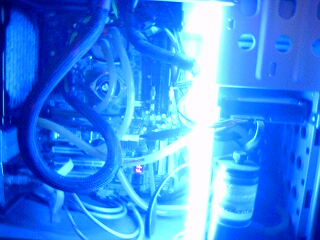 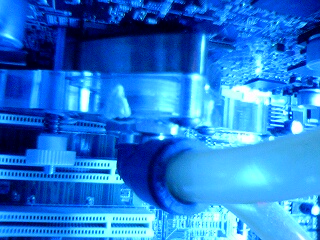